How much is Ronde Barber Worth?

Ronde Barber net worth and salary: Ronde Barber is a retired American professional football player who has a net worth of $12 million. Born Jamael Oronde Barber in 1975 in Blacksburg, Virginia, Ronde Barber and his twin brother, Tiki, both played college football in-state at the University of Virginia. After an impressive college career that included Freshman of the Year and first-team All-ACC honors, Barber was drafted in the third round of the 1997 NFL Draft. He joined the Tampa Bay Buccaneers, where he stayed until his retirement in 2012. Barber went to five Pro Bowls (2001, 2004, 2005, 2006, 2008) and was a three-time first-team All-Pro selection in 2001, 2004, and 2005. Barber was a second-team All-Pro in 2002 and 2006. He was part of the Bucs' Super Bowl XXXVII championship-winning team and is a member of the NFL's 2000s All-Decade Team. At the time of his retirement, Barber held several NFL records, including most consecutive starts by an NFL cornerback and most quarterback sacks by an NFL cornerback. In 2001, he led the league in interceptions and in 2006, he led the league in interceptions returned for touchdowns. Barber is a member of both the 40/20 and 20/20 clubs. He finished his career with 1,172 tackles, 28 sacks, 200 deflected passes, 47 interceptions, 13 forced fumbles, and 12 touchdowns. Barber went into studio booth work after his 2013 retirement. He and his brother Tiki write children's books, including 2004's "By My Brother's Side", 2008's "Go Long!", and 2010's "Red Zone". Barber and his wife, Claudia, live in Florida with their two children. 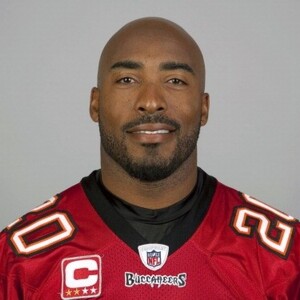