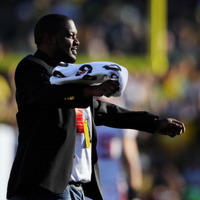 Ron Dayne is a former American professional football player who has a net worth of $4 million. Born in Blacksburg, Virginia on March 14, 1978, Dayne is best known for playing as a running back for the New York Giants from 2000 to 2004, the Denver Broncos in 2005, and the Houston Texans from 2006 to 2007. Dayne played college football for the University of Wisconsin's Badgers and made his National Football League debut in 2000 as the first round and eleventh pick draft. He was named the USA Today High School American in 1995, the Copperbowl Most Valuable Player in 1996, received the Heisman Trophy in 1999, followed by eight more awards that year. He was an NFC Champion in 2000, had his Badgers jersey number retired, received the All-Iron Award in 2005, and was the Fedex Ground NFL Player of the Week in 2006. His NFL career statistics include a total of 3,722 rushing yards, a rushing average of 3.8, a total of 28 rushing touchdowns, a total of 340 receiving yards, and a receiving average of 6.0.