What is Robert Griffin III's net worth?

Robert Griffin III is a football player who has a net worth of $16 million. He played in the NFL for the Washington Redskins, Cleveland Browns, and Baltimore Ravens. Before this, he had a successful collegiate football career at Baylor, where he won the Heisman Trophy. After a professional career beset with injuries, Griffin became a free agent as well as a football analyst for ESPN.

During his NFL career, Robert earned a total of $33 million in salary. His 2012 $21 million contract with the Redskins came with a $13.8 million signing bonus. He also earned millions from endorsements.

Robert Griffin III was born in 1990 in Okinawa, Japan, where his US Army sergeant parents Jacqueline and Robert Jr. were stationed. The family later moved to Tacoma, Washington, and then to New Orleans, Louisiana, before settling in Copperas Cove, Texas. There, Griffin went to Copperas Cove High School, where he became a three-sport star in football, basketball, and track. In football during his junior season, he passed for 2,001 yards and 25 touchdowns, and received first-team All-District 16-4A honors. In track, Griffin broke state records for both the 110-meter and 300-meter hurdles.

Having graduated from high school a semester early, Griffin began attending Baylor University at 17 years of age. As a member of the track team, he finished in first place in the 400-meter hurdles at the Big 12 Conference Championship and the NCAA Midwest Regional Championship. Meanwhile, as a freshman football player, he started 11 of 12 games and earned Big 12 Freshman of the Year honors. Griffin's final season at Baylor was his best; leading the Bears to a 10-3 record, he ended up winning the Heisman Trophy, making him the first player from Baylor to do so. Griffin graduated in 2011 with a BA in political science.

In the 2012 NFL Draft, Griffin was selected by the Washington Redskins with the second overall pick. He was an immediate success in his debut as a starting quarterback, opening the season by completing 19 of 26 passes for 320 yards and two touchdowns. As a result, he was named NFC Offensive Player of the Week and NFL Rookie of the Week. More success came in November, when Griffin passed for 200 yards with four touchdowns, and rushed for an additional 84 yards. However, his season took a brief hit the next month when he sustained a Grade 1 LCL sprain in a game against the Ravens. Later, he suffered a re-injury in a wild card loss to the Seattle Seahawks. Griffin eventually underwent surgery to repair both his LCL and ACL. Despite the setback, Griffin set a record for highest passer rating by a rookie quarterback, with 102.4. Moreover, he helped lead the Redskins to their first playoff appearance since 2007.

Griffin had a rocky season in 2013, failing to reproduce the success of the previous year. He finished the season with 3,203 passing yards and 16 passing touchdowns. More challenges came the following season, when Griffin was carted off the field with a dislocated left ankle in Week 2. He returned in Week 9, only to lose three consecutive games with the Redskins. Griffin bounced back somewhat later in the season; in the final game of the year, he threw for a season-high 336 yards. Griffin's last year with the Redskins brought more injuries, as he suffered a concussion in Week 2 of the preseason. Subsequently, he became a safety with the scout team, and was inactive for the regular season. In early 2016, Griffin was released by the Redskins. 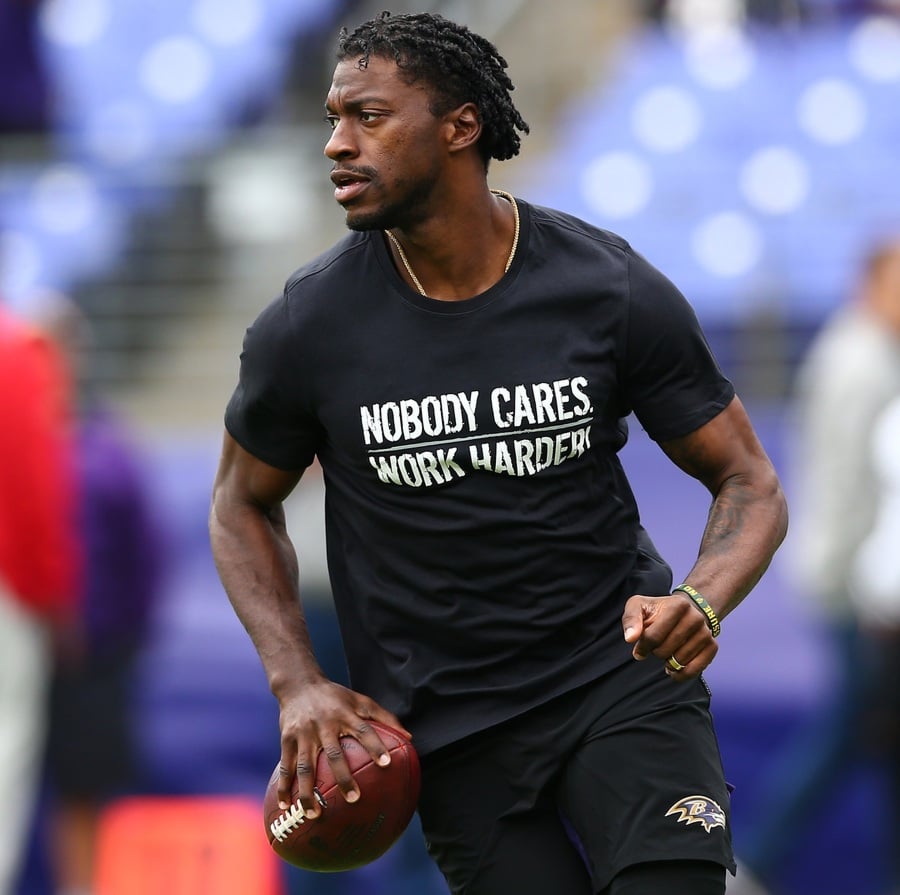 Griffin signed a two-year contract with the Cleveland Browns in 2016. However, following the team's season opener, he was placed on injured reserve due to a shoulder injury. He was activated just before Week 14, and played in five games, during which he completed 87 of 147 passes for 886 yards with two touchdowns. In March of 2017, Griffin was released by the Browns.

After remaining a free agent for 2017, Griffin signed a one-year contract with the Baltimore Ravens in 2018; he then re-signed on a two-year contract the next year. Despite weathering a fractured thumb in the preseason, he was able to recover in time for the regular season opener, a 59-10 win over the Dolphins. For the 2020 season, he injured his left hamstring in Week 12 and had to be replaced by Trace McSorley. In December, he was placed on injured reserve, and in January of 2021, was waived by the Ravens.

Failing to be signed in the 2021 offseason, Griffin became a college football and NFL analyst for ESPN, signing a multi-year deal in August. Griffin has announced that he still wishes to play football, and that his ESPN contract would permit him to sign with a team if the opportunity presented itself.

Griffin has done a number of endorsements during his career. Even before the beginning of his rookie season with the Redskins, he signed deals with companies including Adidas, EA Sports, Nissan, and Subway. According to ESPN, Griffin had earned more money than any other rookie prior to the regular season due to his endorsements.

While at Baylor in 2009, Griffin dated fellow student Rebecca Liddicoat. The two married in 2013, and had a daughter a couple of years later. In August of 2016, it was announced that the couple was in the process of filing for divorce. Subsequently, Griffin became romantically involved with Estonian heptathlete Grete Šadeiko. They got engaged in 2017, and married in 2018. Together, Griffin and Šadeiko have two daughters. 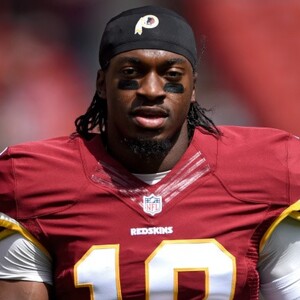