What is Rob Gronkowski's Net Worth and Salary?

Rob "Gronk" Gronkowski is an American football player who has a net worth of $45 million. Gronkowski was drafted by the New England Patriots during sophomore year of college in 2010, and he stayed on the team until his retirement in 2018. As a Patriot, he won three Super Bowls and set multiple records, including the record for most touchdown receptions by a tight end. He is a four-time All-Pro selection and has played in the Pro Bowl five times. In 2012, Gronk signed with the Patriots for an additional six seasons. His extension deal, valued at $54 million, was the largest agreement ever made between a team and a tight end in NFL history at the time.

When he announced his retirement, Rob still had a year left on his contract, and in 2020, the Patriots traded him to the Tampa Bay Buccaneers. Pain and injuries played a part in Gronkowski's retirement, and he stated in April 2020, "Taking a year off was hands down the best decision I made, not just in my career, but also for my health and well-being." In addition to football, Rob has appeared in several film and television projects, including "Entourage" (2015), "The Clapper" (2017), "Family Guy" (2017), and "The Masked Singer" (2020), and in 2015, he starred in and produced the Showtime comedy special "Unsportsmanlike Comedy with Rob Gronkowski."

During his time in the NFL, Gronk earned around $60 million in salary alone. He also earned tens of millions more off the field through endorsements with companies like Tide. In his 2015 book "It's Good To Be Gronk," Rob claimed to not have spent a dime of his NFL salary and instead lives exclusively off his endorsement deal money. In addition to Tide, Gronkowski has endorsed Nike, Dunkin' Donuts, Visa, T-Mobile, Lyft, Cheerios, and more. PLB Sports released a cereal called Gronk Flakes in 2012 and followed it with Gronk's Hot Sauce three years later, and Monster Energy released a signature "Gronk" flavor in 2016.

Rob Gronkowski was born Robert James Gronkowski on May 14, 1989, in Amherst, New York. He grew up in Williamsville with mother Diane, father Gordon (a former Syracuse University football player), and brothers Glenn, Dan, Gordie, and Chris, who have all played professional football. Hockey was Rob's preferred sport until age 14, then he switched to basketball. While attending Williamsville North High School, he played football (tight end, defensive end, and freshman kickoff specialist), basketball (center), and baseball (first baseman) for the school, and after the family moved to Pennsylvania, he played football for Woodland Hills High School. Gronkowski received several honors during his high school years, including being named an All-Western New York first-team, SuperPrep All-American, and Associated Press Class 4-A All-State player. Rob was recruited by multiple colleges and chose to attend the University of Arizona after graduating from high school in 2007.

At the University of Arizona, Gronk was a Pre-Business major, and he played football for the Arizona Wildcats from 2007 to 2009. He scored an average of 18.8 yards per reception as a freshman, which was the best of any player on the team, and he was named Rivals.com freshman All-American and "The Sporting News" freshman All-American. During the 2008 season, Rob was named the John Mackey National Tight End of the Week twice as well as an All-Pac-10 first-team tight end and an Associated Press third-team All-American. In 2009, he had back surgery and had to miss his junior season.

The New England Patriots drafted Gronk in the 2010 NFL Draft; he was the 42nd overall pick, and he signed a four-year, $4.4 million contract, plus a $1.76 million signing bonus. During his first season, the Patriots won the AFC East championship, and Rob earned three Pepsi NFL Rookie of the Week nominations and was chosen for the NFL All-Rookie Team. In 2011, he broke an NFL record, touchdowns scored in a single season by a tight end, while playing the Indianapolis Colts, and he was named AFC Offensive Player of the Week and NFL.com's "Hardest Working Man." The Patriots made it to Super Bowl XLVI but lost to the New York Giants; Gronkowski sprained his ankle during the AFC Championship, and after the Super Bowl, an MRI revealed that he had strained ligaments that required surgery.

In June 2012, Rob extended his contract, signing a six-year, $54 million deal. Later that year, he broke his forearm during a game against the Indianapolis Colts and had to sit out several games; he broke it again during the team's first playoff game and had to undergo another operation. In February 2013, his forearm became infected, and he had surgery to clear the infection, and a few months later, he had yet another operation to replace the metal plate that was implanted during the second surgery. Gronkowski had back surgery in June 2013 and returned to the game in October; two months later, he tore the MCL and ACL in his right knee due to a hit from T. J. Ward of the Cleveland Browns. In 2014, the Patriots won the AFC East championship again, and Rob was nominated for the Pro Bowl and First Team-All Pro. His performance during the 2014 season earned him the Comeback Player of the Year award at the 2015 ESPY Awards. 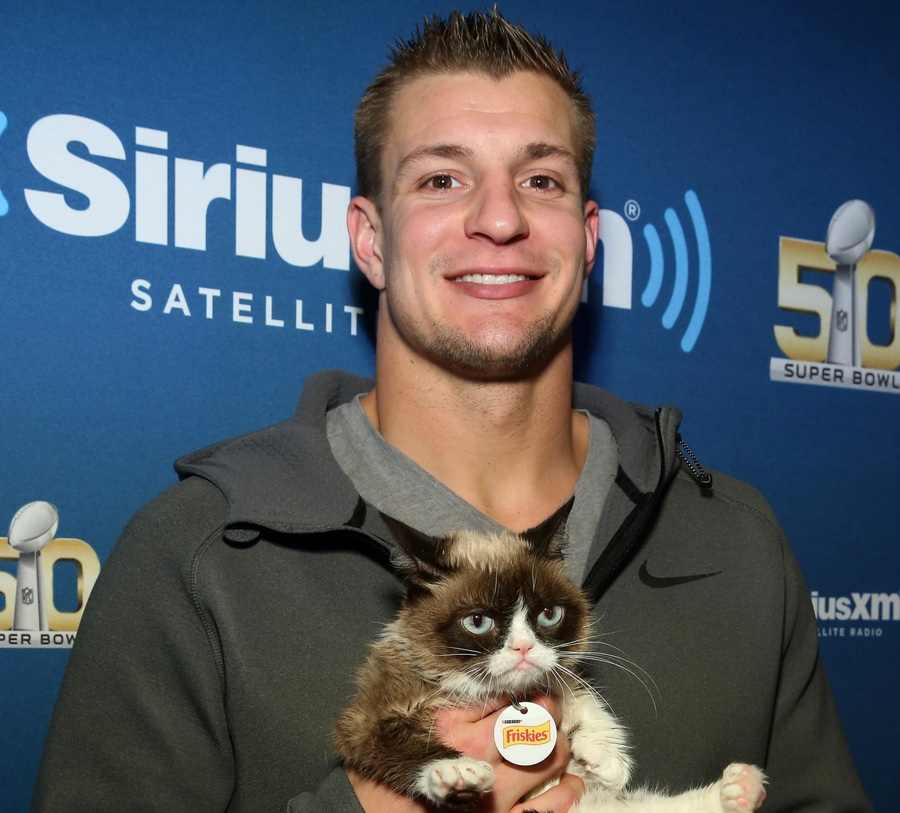 In 2015, the Patriots defeated the Seattle Seahawks to win Super Bowl XLIX 28-24. In 2016, Gronk injured his hamstring, suffered a pulmonary contusion, and had back surgery, and he was on injured reserve in early 2017 when the Patriots scored 34–28 against the Atlanta Falcons to win Super Bowl LI. In January 2018, Rob was chosen for the Associated Press' All-Pro First Team, resulting in a $2.5 million incentive being added to his contract. The following month, the Patriots played the Philadelphia Eagles in Super Bowl LII, losing 33–41. The team was victorious in Super Bowl LIII, defeating the Los Angeles Rams 13–3, and Gronk's 297 yards and 23 catches set a Super Bowl record for yards and catches by a tight end. Rob announced his retirement on March 24, 2019, at the age of 29, but he returned to the game as a Tampa Bay Buccaneer a year later.

Rob began a relationship with model Camille Kostek in 2015. The couple made news in May 2020 when they donated 1,600 masks to the Foxboro Fire Department in order to help first responders during the Coronavirus pandemic. Gronkowski and Kostek appeared together in Kygo's 2020 "I'll Wait" music video, and Rob has also starred in music videos by Katy Perry ("Swish Swish") and 3LAU ("On My Mind"). 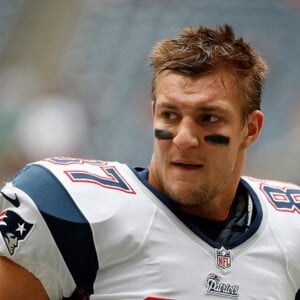