What is Richard Sherman's net worth and salary?

Richard Sherman is an American football football player who has a net worth of $40 million. He played for the Seattle Seahawks from 2011 to 2017. Ahead of the 2018 season he joined the San Francisco, 49ers. He led the league in interceptions in 2013, and at the end of the season, helped the Seahawks win their first Super Bowl. Considered to be one of the best cornerbacks in NFL history, Sherman has been selected to the Pro Bowl multiple times.

In May 2014 Richard Sherman signed a four-year $56 million contract extension with the Seahawks. Exactly $40 million of the deal is guaranteed. The deal paid him $1.4 million salary in 2014 then an average of $11.5 million per year through 2018. Prior to the 2018 season, Richard signed a three-year $27 million contract with the 49ers.

He also has a number of lucrative endorsement deals with companies like T-Mobile, Nike, Oberto, BODYARMOR, and Beats by Dre.

Richard Sherman was born in 1988 in Compton, California. As a teen, he attended Dominguez High School, where he did both football and track and field. During his senior year in 2005, he recorded 1,030 all-purpose yards and 45 tackles, helping Dominguez claim a CIF Southern Section Division III title. Additionally, Sherman won the California state title in the triple jump. He graduated from high school as salutatorian in 2006.

Following his graduation, Sherman accepted an athletic scholarship to Stanford University. He began with the Stanford Cardinal football team as a wide receiver, scoring 34 receptions for 581 receiving yards. Over the next two years, he caught 47 passes, before a knee injury curtailed his season. Subsequently, he switched to cornerback, and made 112 tackles during his final two years. In 2010, Sherman and the Cardinal finished with 12-1, a school record. Sherman graduated from Stanford with a BA in communications.

Start with the Seattle Seahawks

In the 2011 NFL Draft, Sherman was selected in the fifth round by the Seattle Seahawks; he was subsequently signed to a four-year, $2.22 million contract. Sherman made his professional regular season debut in a loss against the San Francisco 49ers. A few weeks later, he made his first career solo tackle in a loss to the Atlanta Falcons. Later, in early 2012, Sherman notched a season-high six solo tackles, a pass deflection, and an interception. He finished his rookie season with 55 combined tackles, 14 pass deflections, and four interceptions in 16 games. Greater success came the next season, when Sherman notched his first career touchdown during a 58-0 victory over the Arizona Cardinals. Moreover, he started all 16 games for the season, and made 64 combined tackles and a career-high 24 pass deflections. Finishing second in the NFC West, the Seahawks progressed to a playoff berth, ultimately falling to the Atlanta Falcons.

Sherman's most successful season yet came in 2013-14, when he was voted to the Pro Bowl for the first time in his career, and to the NFL All-Pro First Team for the second consecutive season. That season, the Seahawks had the top-ranked defense, and finished first in the NFC West. The team then made it to the NFC Championship, defeating the San Francisco 49ers. The Seahawks finished the season by winning Super Bowl XLVIII against the Denver Broncos; with a score of 43-8, it was one of the largest margins of victory in Super Bowl history. Following this, Sherman was signed to a four-year, $56 million contract extension. In 2014, he started all 16 games, making 57 combined tackles and four interceptions. Once again, the Seahawks finished first in the NFC West, and emerged victorious in the NFC Championship Game. The team made it back to the Super Bowl, but ultimately lost to the New England Patriots. 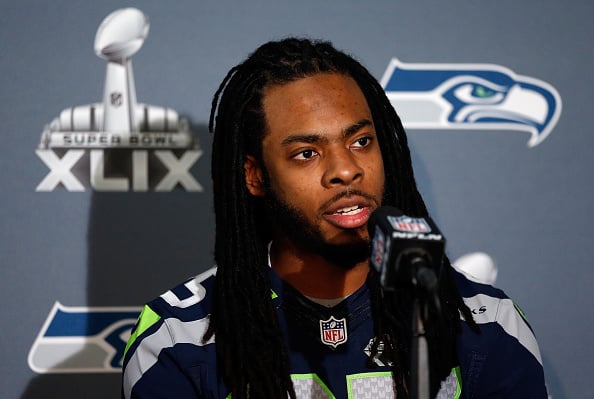 Final Years with the Seahawks

Only a day after his release from the Seahawks, Sherman agreed to a three-year, $39 million contract with the San Francisco 49ers. His season was not great, and he incurred a $10,000 fine for throwing punches at rival players. The next season was more successful, with Sherman scoring his first interception and touchdown with the 49ers. Moreover, he was selected to his fifth Pro Bowl, and was voted on the 2nd Team All-Pro. The 49ers went on to the NFC Championship Game, defeating the Green Bay Packers 37-20. At Super Bowl LIV, Sherman and the 49ers fell to the Kansas City Chiefs.

Due to a calf strain, Sherman was placed on injured reserve in September of 2020. After being activated in November, he recorded his first interception of the season in a 23-20 win. Sherman was released from the 49ers in February of 2021, at which point he became a free agent.

In 2015, Sherman got engaged to Ashley Moss. The year before, the two had their first child, son Rayden Sherman. They had another child, daughter Avery, in 2016. Sherman and Moss later married in 2018.

Sherman started his own charity in 2013. Called Blanket Coverage – The Richard Sherman Family Foundation, it aims to provide clothing and school supplies to children in low-income communities.

Sherman has had some run-ins with the law. In July of 2021, he was arrested under suspicion of burglary and domestic violence, a felony charge that was later dropped. However, the charge was updated to include five misdemeanors, including resisting arrest and driving while under the influence. After spending a day at the King County Correctional Facility, a judge ordered Sherman released on his own recognizance.