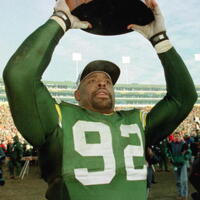 Reggie White net worth: Reggie White was an American professional football player who had a net worth of $6 million. Reggie White was born in Chattanooga, Tennessee in December 1961 and passed away in December 2004. He was a defensive end who played at Chattanooga Howard High School. White played his college football at Tennessee where he was named SEC Player of the Year and had his #92 retired. He played for the Memphis Showboats of the USFL but signed with the Philadelphia Eagles when the league folded. White played for the Eagles from 1985 to 1992 and for the Green Bay Packers from 1993 to 1998. He finished his career with the Carolina Panthers in 2000. During his NFL career White won a Super Bowl championship and was a 13 time Pro Bowl selection. He was a 10 time First-team All-Pro, two time NFL Defensive Player of the Year, and three time NFC Defensive Player of the Year. White led the NFL in sacks twice. His #92 was retired by both the Eagles and Packers and he was named to the NFL 1980s All-Decade Team, NFL 1990s All-Decade Team, and the NFL 75th Anniversary All-Time Team. He was also inducted into the College Football Hall of Fame and the Pro Football Hall of Fame. Reggie White passed away on December 26, 2005 from cardiac arrhythmia at 43 years old.