What is Reggie Bush's Net Worth and Salary?

Reggie Bush was born Reginald Alfred Bush Jr. on March 2, 1985, in Spring Valley, California (San Diego County). After his parents, Reginald Sr. and Denise, split up, his mother married Lamar Griffin in 1989. Reggie has a stepbrother, Javon Griffin, and he attended Helix High School in La Mesa, California. Bush was a running back on the Helix Highlanders football team and was awarded the Silver Pigskin trophy, a prestigious award given out by KUSI-TV's Prep Pigskin Report. In 2003, Bush played in a high school all-star football game called the U.S. Army All-American Bowl, and Rivals.com listed him as the #1 running back in the U.S. Reggie was also on the track team in high school and placed second in the 100 meters final at the 2002 CIF California State Meet and in the boys' 50 meters at the 2003 Los Angeles Invitational Indoor Meet.

After earning an athletic scholarship, Bush decided to attend the University of Southern California. From 2003 to 2005, he played on the USC Trojans. In 2003, Reggie was a first-team Freshman All-American selection, and he set a freshman record at USC with 1,331 all-purpose yards. He was also named the ESPN Pac-10 Newcomer of the Year, and in 2004, he was a finalist for the Heisman Trophy, along with former Helix Highlanders teammate Alex Smith. Bush was named USC's MVP in 2004, and he received All-American honors as well as being a finalist for the Walter Camp Player of the Year Award. He was a first-team All-American in 2005, and he won the Heisman that year. However, he later forfeited the Heisman Trophy after the NCAA ruled that he had received illegal benefits that violated NCAA policies. In 2005, Reggie won several awards, including the Touchdown Club of Columbus Player of the Year, the Associated Press College Football Player of the Year, and the Doak Walker Award. In 2006, he decided to enter into the NFL Draft instead of spending his senior year playing for USC.

Three days before the NFL draft, Bush signed an endorsement deal with adidas. He was the second overall pick in the NFL Draft, and he became a member of the New Orleans Saints. In January 2007, Reggie helped the team make it to their first NFC Championship Game. He missed the last four games of the season due to a partially torn ligament in his knee, and in October 2008, he underwent surgery to repair a torn meniscus in the same knee. Less than two months later, Reggie injured his left knee again, this time spraining his medial collateral ligament, resulting in him being placed on injured reserve. He had surgery on his knee again and had to miss a few games in 2009 due to pain in his knee, a calf injury, and a hamstring injury. On February 7, 2010, the Saints won Super Bowl XLIV, defeating the Indianapolis Colts 31–17. In September of that year, Bush broke a bone in his right leg and couldn't play again until Thanksgiving.

In July 2011, Reggie was traded to the Miami Dolphins, and he was named the AFC Offensive Player of the Week twice during his time on the team. In March 2013, he signed a four-year deal with the Detroit Lions that was worth $16 million (with $4 million guaranteed). The team made it to the playoffs in January 2015 but lost to the Dallas Cowboys 24–20. The Lions released Bush in February 2015, and less than a month later, he signed a one-year, $2.5 million contract (with $500,000 guaranteed as well as a $500,000 signing bonus) with the San Francisco 49ers. He injured his leg in the season opener that September, and in November, he slipped on concrete while playing the St. Louis Rams, crashed into a wall, and tore his left meniscus. Reggie later filed a lawsuit against the Rams, the St. Louis Convention and Visitors Commission, and the St. Louis Regional Convention and Sports Complex Authority, alleging that his season-ending injury was caused by the "concrete ring of death" that surrounded the field. In June 2018, a jury ruled in his favor and ordered the Rams to pay Bush $12.45 million. Reggie signed a one-year deal with the Buffalo Bills in August 2016, and after the season ended, he announced his retirement on December 15, 2017. 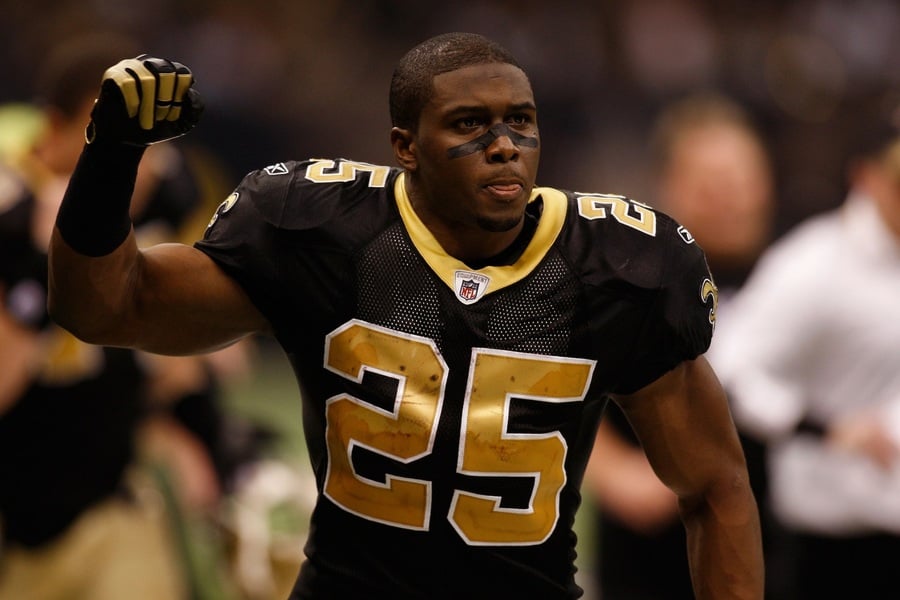 While attending USC, Reggie was in a relationship with future WWE Diva Eve Torres, and he later dated Kim Kardashian after meeting at the 2007 ESPY Awards. Bush and Kardashian broke up in July 2009 and got back together in September before splitting for good in early 2010. In 2011, Reggie began a relationship with dancer Lilit Avagyan, and the couple married on July 12, 2014. They welcomed daughter Briseis on May 6, 2013, followed by sons Uriah and Agyemang on July 12, 2015, and September 2, 2017, respectively.

In 2007, Bush co-starred with David Beckham in the video series "Futbol Meets Football" and entered into a deal with Sirius Satellite Radio to give weekly reports on the NFL season. In February 2010, he appeared on the cover of "Essence" magazine's "Black Men, Love & Relationships" issue. That year, he also earned a nomination from the VH1 Do Something Awards for his charity work with the Diamond Empowerment Fund, which involved visiting South Africa and Botswana and raising funds for education. Reggie, LeBron James, Serena Williams, Dusty Baker, Ray Crockett, and Rick Smith are founding members of the Diamond Empowerment Fund's Athletes for Africa program. In 2012, he became a partner in Barc, a skincare company for men, and served as the brand's spokesperson as well.

In April 2014, Reggie spent $7.75 million on a 5-bedroom, 7,500 square foot mansion in the Pacific Palisades neighborhood of Los Angeles. He listed the home for sale in August 2019 for $9.995 million. He sold the home in May 2020 for $7.4 million, a slight loss compared to his purchase price but a significant drop from the desired $10 million. Around the same time, he listed the Palisades home, Bush paid $5.65 million for a newly-built 9,000 square-foot home in Encino, California.

In April 2014, Reggie spent $7.75 million on a 5 bedroom, 7,500 square foot mansion in the Pacific Palisades neighborhood of Los Angeles. He listed the home for sale in August 2019 for $9.995 million. He sold the home in May 2020 for $7.4 million, a slight loss compared to his purchase price but a significant drop from the desired $10 million.

Around the same time as he listed the Palisades home, Reggie paid $5.65 million for a newly built 9,000 square-foot home in Encino, California.