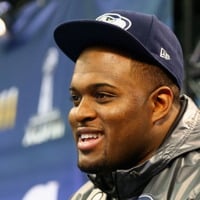 Red Bryant net worth: Red Bryant is an American football player who has a net worth of $17 Million. He currently plays defensive end for the Seattle Seahawks. Red Bryant was born on April 18, 1984 in Jasper, Texas. He played his college ball at Texas A&M, and was both redshirted and named team captain in 2003. During his freshman year, he became a defensive tackle and started in every game, earning All-American and All-Big 12 honors from The Gridiron Report. In his junior season, Bryant was voted a permanent team captain. He played in nine games before undergoing surgery on a torn ACL. In his senior season, Bryant recorded 41 tackles, a sack that led to a safety, and blocked a field goal. Along with eight teammates, Bryant received an All-Big 12 Honorable Mention. Bryant also participated in the 2008 Senior Bowl, playing for the South team. He recovered a fumble in a narrow South win. After graduating, Bryant was drafted by the Seattle Seahawks with the 121st pick (4th round) of the 2008 NFL Draft. In his rookie season, he was inactive for 12 games, recording just eight tackles. He played sparingly during the 2009 season and was moved to defensive end during the 2010 offseason. He missed over half of the season due to injury and was placed on injured reserve. In 2011, Bryant blocked four kicks, breaking the franchise single-season record. He also had an interception returned for a touchdown in a game against the Chicago Bears. He resigned with the Seattle Seahawks in 2012, inking a five year, $35 million deal.