Rashad Jennings net worth and salary: Rashad Jennings is a retired American professional football player who has a net worth of $6 million. Rashad Jennings was born in Forest, Virginia in March 1985. He is a running back who played at Lynchburg Liberty Christian Academy and then Liberty University. Jennings was drafted #250 by the Jacksonville Jaguars in the 2009 NFL Draft. He played for Jacksonville from 2009 to 2012. Jennings played for the Oakland Raiders in 2013 and for the New York Giants from 2014 to 2016. He is currently a free agent who has 23 career touchdowns. Jennings competed on the reality television series Dancing with the Stars in 2017. In March 2014, Rashad Jennings signed a 4-year $14 million contract with the NY Giants that included $3 million in guaranteed money. Soon after signing that contract he took over as a starter. In total during his career he had more than 3700 rushing yards and 191 receptions. 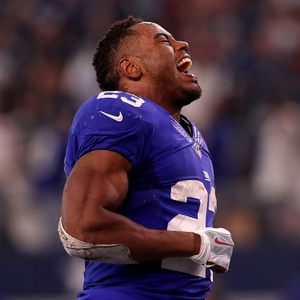