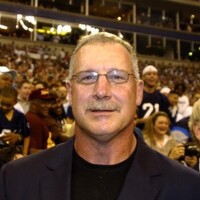 Randy White net worth: Randy White is an American retired professional football player who has a net worth of $5 million. Randy White was born in Pittsburgh, Pennsylvania in January 1953. He played at Thomas McKean High School and is considered to be the "best all-time player" in Delaware high school football history. White played college football for the University of Maryland. He started off at fullback but was moved to defensive end. In his senior year he won the Outland Trophy, the Lombardi Award, and was named Atlantic Coast Conference Player of the Year. He was elected to the College Football Hall of Fame in 1994 and named to the ABC sports All-Time All-America Team in 2000. Randy was drafted #2 by the Dallas Cowboys in the 1975 NFL Draft and moved to middle linebacker. White played his entire career with the Cowboys from 1975 to 1988. During his NFL career White was a nine time Pro Bowl Selection and a nine time First-team All-Pro selection. He was a three time NFC Champion and won Super Bowl XII where he was named co-Super Bowl MVP. In 1988 he won the Ed Block Courage Award. White has been named to the NFL 1980s All-Decade Team and was inducted into the Dallas Cowboys Ring of Honor. He was inducted into the Pro Football Hall of Fame in 1994.