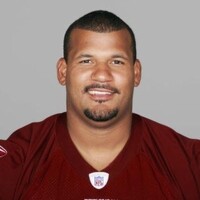 Randy Thomas Net Worth: Randy Thomas is an American professional football player who has a net worth of $15 million. Born in East Point, Georgia, in 1976, Randy Thomas played college football at Mississippi State University. The offensive lineman was drafted with the 57th overall pick during the second round of the 1999 NFL Draft by the New York Jets. He played with the Jets from 1999 until 2002 before joining the Washington Redskins from 2003 until 2009. Thomas suffered a brutal injury while playing with the Redskins; in a game on September 20, he tore the triceps muscle off the bone in his arm. In 2010, Thomas joined the Miami Dolphins, but did not suit up in a regular season game for the team after suffering another arm injury. As of the fall of 2014, Thomas has not officially retired from the NFL, though he has not played in a game since the 2009 season. Thomas has played in 143 career NFL games to date, and started every one. He opened up his own rib and barbecue restaurant called RT's in the suburbs of Atlanta, Georgia, in 2004. The restaurant is known now as R. Thomas Deluxe Grill. He made headlines for battling world-renowned professional eater Sonya Thomas in a shrimp-eating competition, though he lost.