Randy Moss net worth: Randy Moss is an American retired professional football player who has a net worth of $25 million dollars. Randy Gene Moss was born in Rand, West Virginia in February 1977. He attended DuPont High School where he excelled in football, basketball, baseball, and track and was named by Parade magazine as one of their 50 greatest high school players of all time.

On the football field, Moss led the DuPont Panthers to back-to-back state championships in 1992 and 1993. He was a star at wide receiver, but also played defensive back, returned kickoffs and punts, and was the team's kicker and punter. In 1994, he was honored with the Kennedy Award as the West Virginia Football Player of the Year. At DuPont, Moss was also named the West Virginia Player of the year for basketball twice. On March 23, 1995, Moss backed a friend in a hallway fight against a white student who had allegedly used racist comments towards Randy's friend. Moss was initially charged with a felony for kicking the student, but it was later reduced to a misdemeanor. On August 1, 1995, Moss pled guilty to two counts of misdemeanor battery and was sentenced to 30 days behind bars at the South Central Regional Jail in Charleston, West Virginia. He served 3 days in jail starting that night and would be required to serve the remaining 27 days within the following 18 months, after he completed his freshman year in college. He was expelled from the school and completed his education at an alternative school called Babell Alternative School. He was denied by Notre Dame after his racially charged fight in high school. He then went to Florida State, but was dismissed for testing positive for marijuana. He ended up playing for Marshall University, where he was a First-team All-American twice and won the Fred Biletnikoff Award and Paul Warfield Trophy in 1997. Moss was selected #21 by the Minnesota Vikings in the 1998 NFL Draft.

He played with the Vikings for seven seasons and was traded to the Oakland Raiders. He was later traded to the New England Patriots. He returned to Minnesota and then played for the Tennessee Titans and San Francisco 49ers. During his 14 seasons he set records for NFL single-season touchdown receptions (23), NFL single-season touchdown receptions for a rookie (17), and finished second on NFL all-time regular seasons touchdown receptions with 156. Moss won an AFC and an NFC Championship. He was a seven time Pro-Bowler and one time Pro Bowl MVP. He was a four time AP First-Team All-Pro selection and a one time NFC Player of the Year. After being released from the 49ers he was hired by Fox Sports 1 for their Fox Football Daily show. Moss' parents are Maxine Moss and Randy Pratt, but Moss has little contact with his father. He has a sister named Lutisia and a brother Eric, who had a short stint in the NFL as an offensive lineman with the Minnesota Vikings. Moss has four children with his girlfriend, Libby Offutt (two daughters, Sydney and Senali, and two sons, Thaddeus and Montigo). 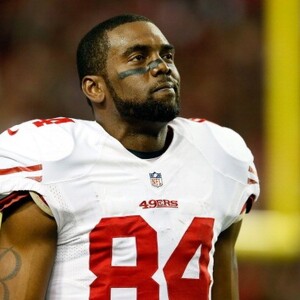