What is Philip Rivers' Net Worth and Salary?

Philip Rivers is a retired American football player who has a net worth of $100 million. After 17 seasons in the NFL, Rivers retired in 2020 after a final season with the Indiana Colts. He began his career with the New York Giants after a successful college run with North Carolina State. Rivers was then traded to the San Diego Chargers, where he played successfully for 16 seasons. From 2006 to 2019, Philip was the starting quarterback for the Chargers. Although he was very consistent during his time with the Chargers, he never made a Super Bowl appearance. To this date, Rivers hold the most passing yards and touchdown passes for any quarterback who never made it to the Super Bowl. With all of this in mind, it should come as no surprise that Rivers is considered the best quarterback in history to have never played in a Super Bowl.

Philip Michael Rivers was born on December 8th of 1981 in Decatur, Alabama. He was raised in a Roman Catholic family that was highly athletic. His father coached the local high school football team, and his mother was a schoolteacher. His younger brother Stephen later went onto play college football. He first started playing football during his high school years, and was coached primarily by his father. Although he established himself as the best prep passer in the state, Philip was dead-set on playing as a quarterback.

The only college that would take him seriously as a quarterback was North Carolina State. He played under coach Chuck Amato and quickly became the starting quarterback. He racked up some impressive statistics during his college years, and this made him a popular choice for the 2004 NFL Draft.

When the draft rolled around, many teams surprisingly snubbed him because they believed that he had a low level of arm strength. He had also developed a unique throwing style that involved a side-arm motion. This didn't sit well with a lot of teams, and in the end he was drafted by the New York Giants with the Chargers ready to take him off their hands at a moment's notice. That inevitable moment came in 2004, when Rivers signed a six-year contract with the Chargers.

He began his career as the third-string quarterback for San Diego, and playing time was rare due to the success of Drew Brees. In 2005, he became the second-string quarterback but continued to remain in the shadow of Brees. In 2006, Brees departed and Philip was finally given a chance to shine. He quickly established himself as one of the best quarterbacks in the league and led the team to several impressive comebacks. In 2007, he earned widespread respect after playing an entire game with a torn ACL. 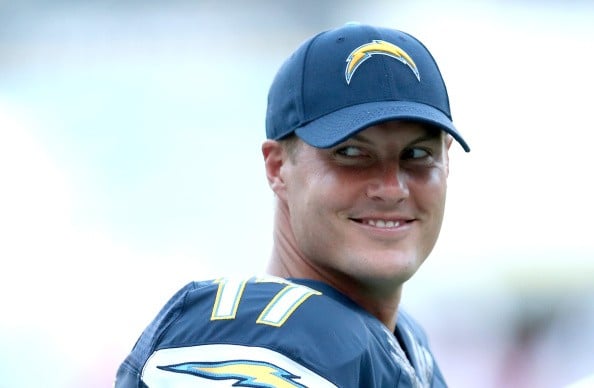 By 2008, he was leading the league in touchdown passes, passer rating, yards per pass attempts, and adjusted yards per attempt. In 2009, Philip signed a six-year contract extension with the Chargers and continued to lead the league in several categories. He amassed more than 25,000 career yards by 2012, which was the seventh-fastest out of all NFL quarterbacks.

In 2015, he signed another four-year contract extension. This took him to 2019, when both the Chargers and Rivers both agreed that it was in their best interest to part ways. He then signed a one-year deal with the Colts and officially retired in 2020. After retiring, he announced plans to start working as a high school football coach, just like his father before him.

Philip Rivers signed a six-year $92 million deal with the San Diego Chargers in 2009. In 2015, he signed a four-year contract extension worth $84 million. During his career, Philip has earned a total of $243 million in NFL salary alone.

In 2017, it was reported that Philip Rivers was being driven around in a specially-designed SUV complete with what reporters described as "its own living room." The spacious vehicle included its own luxurious film room, allowing Philip to watch football games on his way to practice with the Chargers. This decision was largely due to Los Angeles' infamous traffic, and Rivers even considered using a helicopter before settling on the luxurious SUV. Reporters predicted that the vehicle cost him at least $200,000, plus additional fees for hiring a driver.

In 2020, Rivers purchased a home in Westfield, Indiana for just under $1 million. Described as "modest" by pro athlete standards, the residence features five bedrooms and spacious square footage. Located in the affluent neighborhood of Brookside, the home quickly went up for sale after Philip retired from the NFL after playing a single season with the Colts. This home was given a price tag of $1.05 million, and it quickly attracted a buyer. This is hardly a surprise, seeing as the estate offers 7,500 square feet of living space, four fireplaces, a wet bar, and a projection theater system.

Also in 2020, it was reported that Rivers was selling his home in California. The six-bedroom, 6,844-square-foot residence hit the market with a price tag of $4.2 million. Located in a gated community within the San Diego area, this mansion features highlights like a media room, ocean views, a pool, an indoor basketball court, a spa, and its own 18-hole golf course. Philip originally purchased the home back in 2009 for $3.299 million.