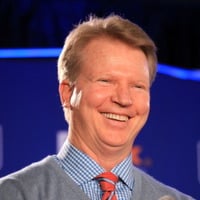 What is Phil Simms' Net Worth and Salary?

Phil Simms is a retired American football quarterback who has a net worth of $16 million. Phil Simms played in the NFL for 15 years with the New York Giants. In 1987, he helped the team win Super Bowl XXI by recording the highest completion percentage in Super Bowl history. After retiring from the NFL, Simms became a television sportscaster for ESPN, and then moved on to NBC and CBS. After retiring, Phil went on to enjoy a successful career as a broadcaster for ESPN, NBC and CBS.

Phil Simms was born on November 3, 1955 in Springfield, Kentucky on the farm of his grandfather. As a youth, he went to St. Dominic's Elementary before moving with his family to Louisville, where he went to St. Rita Catholic School. Simms went on to attend Southern High School, playing as the quarterback for the Trojans football team. He graduated in 1974.

In the 1979 NFL Draft, Simms was chosen in the first round by the New York Giants; a controversial decision due to Simms' relative lack of attention during his collegiate career, many booed his selection. However, he quickly proved his aptitude by winning his first five starts of his rookie season and being named to the NFL All-Rookie Team. Unfortunately, his subsequent four seasons were plagued by injuries and erratic performances on the field. In 1980, Simms posted a 48% completion percentage with 15 touchdowns and 19 interceptions. The following year, he recorded a 54.4% completion percentage before his seasons ended prematurely due to a shoulder injury in November. Simms subsequently missed the entire 1982 season due to a knee injury. His misfortunes continued in 1983 when he suffered a thumb injury that ended his season after the sixth game of the Giants' season.

Simms finally got over his injuries and inconsistent playing in 1984. Having acquired a better understanding of NFL defense, team formations, and pass protection schemes, he improved his performance with 22 touchdown passes over 4,044 yards, and led the Giants to the playoffs. Moreover, Simms was voted to the Pro Bowl, where he was named the MVP. He had an even better year in 1985 when he led the Giants to ten victories, the most for a Giants team in over 20 years.

Phil Simms had his best season with the Giants yet in 1986, passing for 3,487 yards and 21 touchdown passes while leading the Giants to 14 victories. The team went on to face off against the Denver Broncos at Super Bowl XXI, where Simms delivered one of the greatest performances in the history of the tournament. Completing 22 of 25 passes for 268 yards, he set Super Bowl records for accuracy, passer rating, and completions. Giants coach Bill Parcells called it the "best game a quarterback has ever played." The Giants won the Super Bowl title 39-20, and Simms was named the tournament's MVP. 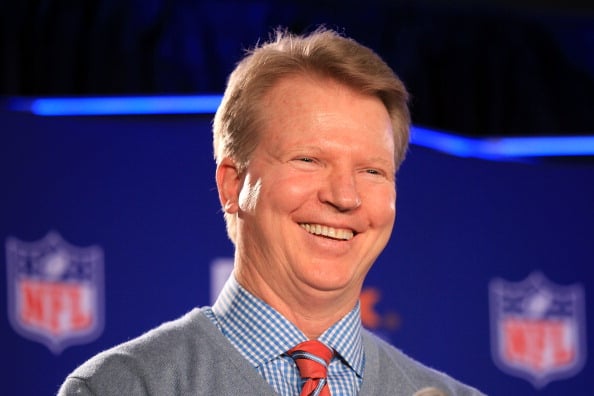 Following his incredible 1986 season, Simms had a solid year during the strike-shortened 1987 season, finishing with the second-highest quarterback rating in the NFC. In 1988, he recorded a 54.9% completion percentage and led the Giants to a 10-6 regular season record. The following year, Simms posted a 56.3% completion percentage while leading the Giants to a 12-4 regular season record. In the playoffs against the Los Angeles Rams, the Giants lost 19-13. Simms subsequently had a mighty 1990 season, at least for a while; after leading the NFC in quarterback rating, he had his season curtailed by a broken foot. The Giants went on to win Super Bowl XXV with Jeff Hostetler filling in as quarterback.

After the Giants' victory at Super Bowl XXV, Hostetler was named the team's starting quarterback. This reduced Simms to only a few appearances during the 1991 season. However, he returned to the starter position in 1992. Four games into the season, Simms suffered an arm injury that put him out for the remainder of the season. He bounced back in 1993 when new head coach Dan Reeves made him the starting quarterback for all 16 games of the season. Simms went on to lead the Giants to an 11-5 season record. Following the season, the team released Simms; he subsequently retired.

Following his retirement from the NFL, Simms joined ESPN as a sports analyst. He then moved over to NBC as a color commentator alongside Paul Maguire and Dick Enberg during coverage of Super Bowls XXX and XXXII. Additionally, Simms announced weightlifting events at the 1996 Summer Olympics in Atlanta, and did sideline reporting for NBA games broadcast on NBC Sports. In 1998, he moved to CBS, where he teamed with Greg Gumbel and then Jim Nantz. On the network, Simms has also worked with Lesley Visser, Armen Keteyian, Bonnie Bernstein, Cris Collinsworth, and James Brown, among others. In addition to CBS, he has done commentating for the NFL Network.

Simms has made a number of other media appearances. On CBS, he has appeared as himself on the daytime soap opera "As the World Turns" and the sitcom "How I Met Your Mother." Simms also had an uncredited cameo in a 2014 episode of the procedural drama series "Elementary." Among his other appearances, he served as part of the commentary team alongside Jim Nantz in multiple "Madden NFL" video games.

With his wife Diana, Simms has three children named Chris, Deirdre, and Matthew. Both Chris and Matthew have played in the NFL. Simms resides in the borough of Franklin Lakes, New Jersey with his wife.