What is Peyton Manning's net worth and salary?

Peyton Manning is an American NFL quarterback who has a net worth of $300 million. At the peak of his playing days, Peyton was one of the highest-paid celebrities in the world. He endorses many major brands and frequently appears in television commercials for brands like Buick, Papa Johns and DirecTV.

He has extremely lucrative endorsement deals with a wide range of companies including Sony, ESPN, Spring, DirecTV, Master Card, Reebok and Gatorade. Peyton also owns twenty one Papa John's pizza franchises located in Colorado. With his $18 million peak NFL salary, in some years Peyton earned over $40 million. Even after retiring, Peyton earns at least $10 million per year from endorsements.

Between NFL salary and endorsements, Peyton Manning's career earnings are a little under $600 million.

Peyton Manning was born on March 24, 1976 in New Orleans, Louisiana. Peyton is the older brother of New York Giants quarterback Eli Manning, and the son of former NFL quarterback Archie Manning. Manning went to Isidore Newman School in New Orleans where he played football and was named the Gatorade Circle of Champions National Player of the Year. While attending school, he wore the #18 jersey in honor of his older brother, Cooper Manning, who had to give up football due to a spinal condition. Manning was an extremely sought after high school player and was recruited by over 60 top-notch colleges.

Peyton Manning began his professional football career when he was drafted by the Indianapolis Colts as the first overall pick in 1998 after an impressive college football career at the University of Tennessee (many fans were surprised he didn't pick the Ole Miss Rebels, for whom his father had played.) Manning was picked by the Colts as the first overall pick in the 1998 NFL draft. He played with the Colts from 1988-2010. Reportedly, Manning memorized the Colts' playbook in one week after he was drafted. In 2012, he was able to precisely recall details of a specific play he had used 16 years prior. Manning helped transform the struggling Colts into consistent playoff contenders. During his time with the Colts, Manning led them to eight division championships, two AFC championships, and in 2006 Peyton led the Colts to a Super Bowl victory against the Chicago Bears. In 2009, he made his second Super Bowl appearance but the team lost to The Saints, who won their first Super Bowl in team history. In 2011, Manning was forced to sit out an entire season after he underwent neck surgery. He was subsequently released from the Colts and signed with the Denver Broncos.

From 2012-2015, Manning served as the Bronco's starting quarterback. He helped the Broncos clinch their division each year. In 2016, Peyton made his third Super Bowl appearance, and the Broncos claimed victory over the Carolina Panthers in Super Bowl 50. Shortly after their big win, on March 7, 2016, Manning announced his retirement after 18 seasons. In October 2017, the Colts unveiled a bronze statue of Manning outside Lucas Oil Stadium in a ceremony attended by hundreds of fans. Manning was then inducted into the Indianapolis Colts Ring of Honor.

Peyton Manning is largely considered to be one of the best NFL quarterbacks of all time. To date, Peyton is the NFL record holder for most consecutive seasons with over 4,000 yards passing and most total seasons with 4,000 or more yards passing in a career. Over his career, Peyton has received dozens of accolades including being a 13 time Pro-Bowl selection and five-time AP NFL Most Valuable Player. He also won nine total ESPY Awards over the course of his career.

Peyton and Eli Manning played against each other three times in their pro careers. The encounters were nicknamed The Manning Bowl. The first one was in September 2006. The second Manning Bowl was in 2010 and the third and final Bowl took place in September 2013. Two were with the Colts and one was with the Broncos, and Peyton's team took victory over Eli's each time.

When he was on the Denver Broncos, Peyton earned $18 million per year in base salary. He also had the ability to earn millions more in bonuses and incentives. Outside of sports, Peyton earns an additional $25 million per year from endorsements, bringing his total annual income to $43 million.

In July 2011, Peyton signed a five year $90 million contract with The Colts that made him the highest-paid football player in the league at the time. Unfortunately Peyton was injured before the start of the 2011 season and was not able to play in a single game. After months of rumors, on March 7th 2012, Peyton Manning was let go by the Indianapolis Colts which made him a free agent to seek new offers. He soon signed a new $96 million contract with The Denver Broncos. Because of Peyton's past injuries, he took no signing bonus with The Broncos and was subject to a full physical every year before getting paid. 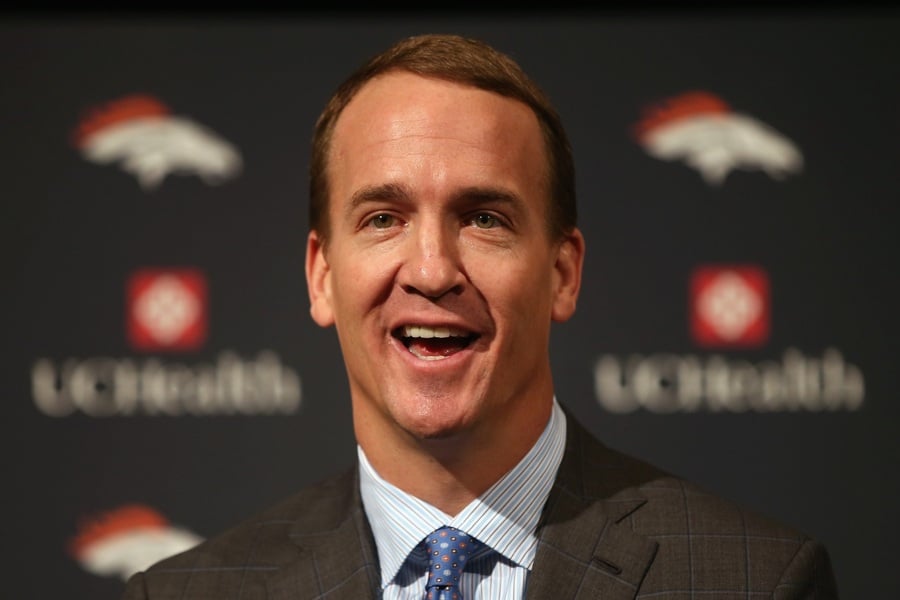 Peyton Manning is one of the highest-paid athletes in the world both on and off the field. He endorses many major brands and frequently appears in television commercials for brands like Buick, Papa Johns and DirecTV. He has extremely lucrative endorsement deals with a wide range of companies including Sony, ESPN, Spring, DirecTV, Master Card, Reebok and Gatorade. Peyton also owns twenty one Papa John's pizza franchises located in Colorado. Peyton earns over $25 million a year in endorsements alone. In 2000, Manning co-authored a book with his father Archie titled Manning: A Father, His Sons, and Football Legacy. He appeared as the host of an episode of Saturday Night Live in 2007, on his 31st birthday. The episode was SNL's highest household rating in more than 10 months. He appeared on SNL again in 2008 and on the 2015 SNL 40th anniversary special. In 2009, Manning guest-voiced an episode of The Simpsons, "O Brother, Where Bart Thou?". Manning also did voice work for the 2017 motion picture Ferdinand. In 2017, Manning hosted the 2017 ESPY Awards.

Peyton is married to Ashley Manning. They got married in Memphis on March 17, 2001. The couple has twins, Marshal and Mosley, born in March 2011. During summers, Peyton and his siblings Archie, Eli, and Cooper run the Manning Passing Academy. It's a five day camp for students that aims to improve the offensive skills of quarterbacks, wide receivers, tight ends, and running backs. The camp features many prominent NFL players serving as coaches.

Manning was accused of sexual harassment by trainer Jamie Ann Naughbright in 1996, during his time playing for the University of Tennessee. He denied the claims and was quoted in his book as saying his behavior towards Naughtbright was "crude, maybe, but harmless". Naughtright settled with the university for $300,000. Peyton discussed Naughtright in his book in an ill manner, and she filed a defamation suit against him in 2002. The lawsuit was settled but terms of the settlement were not released to the public, and a court-ordered gag was put in place on Manning and Naughtright to never speak to each other or about the settlement publicly ever again.

Manning is a self-described devout Christian. During the 2016 presidential race, Manning gave money to the campaign of Jeb Bush.

Shortly after beginning his NFL career, Manning founded his charity the Peyback Foundation, whose mission is to help disadvantaged kids. Manning received the Samuel S. Beard Award for Greatest Public Service for his work with the charity. Manning and his brother Eli volunteered in the immediate wake of Hurricane Katrina by assisting in the delivery of 30,000 pounds of supplies like water, Gatorade, diapers, and baby formula to residents of New Orleans. In 2007, Manning and his wife made a substantial contribution to St Vincent's Hospital in Indianapolis, and the hospital subsequently renamed their children's hospital to Peyton Manning Children's Hospital at St. Vincent. 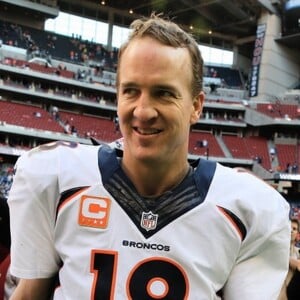