Peter Boulware Net Worth: Peter Boulware is a retired American professional football player who has a net worth of $12 million. Peter Boulware was born in Columbia, South Carolina, in 1974. He played college football for the Florida State Seminoles, where he was a consensus All-American in 1996. The Baltimore Ravens drafted him with the fourth overall pick during the first round of the 1997 NFL Draft.

Boulware played every down of his pro career as a member of the Ravens until his 2005 retirement. The six-foot-four, 255-pound linebacker earned NFL Defensive Rookie of the Year honors in 1997, the first accolade in a pro career that was eventually filled with honors. Boulware is a four-time Pro Bowl player (1998, 1999, 2002, 2003) and earned one All-Pro berth in 1999. He was part of the Ravens' victory in Super Bowl XXXV over the New York Giants in 2001 in Tampa, Florida. In 2001, Boulware led the AFC in sacks. He is a member of the Baltimore Ravens Ring of Honor. Boulware finished his pro playing career with close to 400 total tackles to go along with 70 quarterback sacks and one interception. After his retirement, he ran for the house in Florida as a Republican, winning the primary with close to 85 percent of the vote. He later lost by just over 400 votes to the democratic candidate. Afterwards, he was given a spot on the Florida Board of Education. 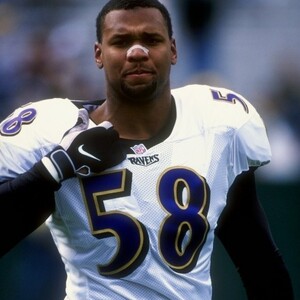