What is Pete Carroll's Net Worth and Salary?

Pete Carroll is an American football coach who has a net worth of $40 million and an annual salary of $8 million. Pete Carroll is best known for being the head coach and executive vice president of the Seattle Seahawks. Prior to accepting this position, Carroll experienced considerable success as the head coach of the USC Trojans. During this time, he won six bowl games and a BSC National Championship game.

After moving to the Seahawks, Pete continued his successful run. To date, Carroll has led the Seahawks to nine playoffs, five division titles, two Super Bowl appearances, and a single Super Bowl title in 2013. This was the first time the Seahawks had ever won the Super Bowl. Not only that, but Carroll joined Jimmy Johnson and Barry Switzer as the only three coaches to have won a Super Bowl and a college football national championship.

Pete Clay Carroll was born on September 15th of 1951 in San Francisco, California. Raised in Greenbrae, California, Pete became an avid athlete during his high school years. Despite his slender frame, he became a star for his football team and played quarterback, defensive back, and wide receiver. He also joined the school's baseball and basketball teams; By the time he was a senior, he had won the Athlete of the Year award at his school.

After graduating from high school, Carroll attended the College of Marin and continued to play football. He then transferred to the University of the Pacific and played free safety for two years. Eventually, he earned his Bachelor of Science in Business Administration and graduated in 1973. Pete then attempted to join the World Football League, but was turned down due to his small size and shoulder issues. He then tried to make ends meet by selling roofing materials, but he quickly gravitated towards coaching instead.

Carroll's first job came at the University of the Pacific as a graduate assistant for Chester Caddas. He went back to class and earned a Master's degree in physical education. Lou Holtz then hired Pete as a graduate assistant at the University of Arkansas. Further roles came with Iowa State University and North Carolina State University, the latter of which saw him acting as head coach. He then tried his luck in the NFL, first acting as a defensive backs coach for the Buffalo Bills. Eventually, Carroll was named head coach of the New York Jets in 1994. Unfortunately, he was fired after one season, and a similar scenario played out with the San Francisco 49ers.

Pete returned to college football and accepted a position with the Trojans. Despite a controversy involving NCAA sanctions at the end of his career, Carroll ended his time with USC as a hero, having led the team to many accomplishments. He then moved to Seattle Seahawks in 2010. Since then, he has become an integral part of the team's success, leading them to their first-ever Super Bowl in 2013. 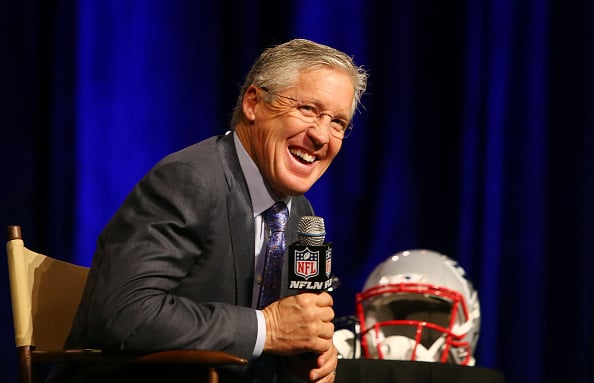 Pete Carroll is known for his aggressive, "all or nothing" coaching style, which has earned him the nickname "Big Balls Pete." He frequently chooses to "go for it" on fourth down instead of punting. After taking control of the Seahawks, Carroll earned significant praise for transforming the team's defensive strategy. The defense became known as the "Legion of Boom," which led the NFL in scoring defense for four years in a row.

From a more psychological standpoint, Carroll advocates clear thinking and "removing the clutter" from the sport. He is influenced by figures such as Carl Jung, Zen masters, and Buddhist meditation masters. Pete gained a reputation for being lighthearted during his time at USC, and he regularly staged pranks and special events to lighten the mood for his players. That said, he can also be incredibly strict. A good example of this is the fact that he closely controlled the diets of his players at USC.

As the head coach and executive vice president of the Seattle Seahawks, Pete Carroll enjoys a salary of $8 million per year. This is quite an improvement over his salary of $182 per week when he first took an assistant coaching job at the University of Arkansas under coaching legend Lou Holtz.

In 2015, it was reported that Pete Carroll had sold his home in Hunts Point, a small town in the greater Seattle metropolitan area. He received $6.1 million for the property. Although this might seem like a major payday, it's important to note that he and his wife Glena purchased the property less than a year prior for $5.9 million. It was unclear why the Carrolls chose to move on so quickly, as they clearly didn't earn much of a return. The residence features three bedrooms and spans 3,860 square feet. Additional highlights include a detached guest suite, a moorage dock, and a private beach.

In 2016, Pete sold another home in Manhattan Beach, California. The beach cottage sold for $2.05 million, which was $50,000 more than the asking price. Spanning 1,200 square feet, the cottage offers exceptional ocean views, two bedrooms, and a brick patio. Carroll had been holding onto this residence for many years, as he originally purchased it back in 1999 for just $540,000. For a period of time, Pete was renting it out for $4,500 per month.

In 2017, Carroll sold yet another home in Rolling Hills, Washington. The $3.05-million off-market deal concluded three years of notable real estate transactions for Pete, and it seems as though he was in the mood to cash in on these investments. Set in a corner lot on a private street, the 1950s home features just one story. That being said, it is quite spacious with 4,000 square feet of living space and four bedrooms. Highlights include cathedral-style vaulted ceilings, French doors, four fireplaces, and skylights. Outside, the home features a patio, a swimming pool, a putting green, a spa, and exceptional views of the surrounding greenbelt and park areas. 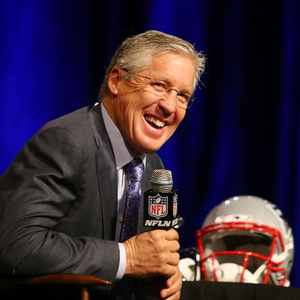