Percy Harvin net worth and salary: Percy Harvin is an American professional football player who has a net worth of $18 million dollars. Percy Harvin was born in Chesapeake, Virginia, and was a gifted athlete even as a child. He grew up in a family of accomplished track stars, and became known for both his speed and intelligence on the football field. He helped his high school team to an excellent record, and played in the U.S. Army All-American Bowl. He was also a track champion while in high school, and set four state records. He was considered the #1 football recruit by his senior year, an honor that was marred slightly by occasional lapses into unsportsmanlike behavior. He spent three seasons playing football for the University of Florida, where he continued to set records. In 2009, despite testing positive for marijuana use, the Minnesota Vikings drafted him. He had a stellar first year with the Vikings, and was named AP NFL Rookie of the Year, PFWA Offensive Rookie of the Year, Sporting News NFL Rookie of the Year, and Pepsi NFL Rookie of the Year. However, since then, he has battled with migraine headaches so severe they have caused him to pass out on the field, and recurring injuries related to a labrum tear in his right hip. He played for the Vikings until 2012, and has played for the Seattle Seahawks since 2013. 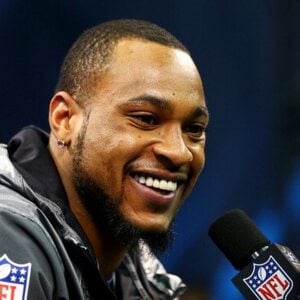