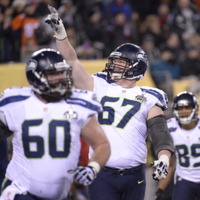 Paul McQuistan net worth: Paul McQuistan is an American football player who has a net worth of $13.6 Million. He currently plays offensive guard for the Seattle Seahawks. Paul McQuistan was born on April 30, 1983 in San Diego, California. He attended Lebanon High School in Oregon and was named second-team All-Valley League as an offensive lineman, while making All-Valley League Honorable Mention as a defensive lineman. McQuistan went to college at Weber State University, where he played alongside his twin brother Pat. The two of them were both selected in the 2006 NFL Draft, Paul by the Oakland Raiders with the 69th pick (third round) and Pat by the Dallas Cowboys with the 211th pick (seventh round). Paul McQuistan started the first six games of his rookie season for the Raiders at right guard, but was benched for the final ten. In 2007, McQuistan switched to right tackle, and started six games in 16 appearances. In 2008, he played in just one game before suffering a season-ending injury. The Raiders released McQuistan in November 2009. McQuistan was a member of the Jacksonville Jaguars during the 2009 season, and the Cleveland Browns during the 2010 season, though he didn't appear in a game for either of them. In January 2011, McQuistan signed with the Seahawks. With Seattle, McQuistan has been an important part of the offensive line, appearing in all 48 possible regular-season games and starting in 40 of them.