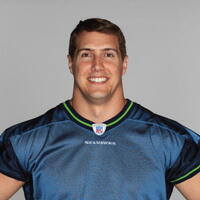 Patrick Kerney Net Worth: Patrick Kerney is a former American football player who has a net worth of $14.8 Million. Born Patrick Manning Kerney on December 30, 1976, in Trenton, New Jersey, he served as a defensive end in the National Football League (NFL) for eleven seasons. While he was studying at Taft School in his native Pennsylvania, Kerney was a starter in football and a two-year letterman in wrestling. He continued to play college football for the University of Virginia, where amassed 127 tackles and 24 sacks in his three-year tenure. In 1999, he was drafted by the Atlanta Falcons in the first round of the NFLDraft that year, wearing the number 97 jersey. In his decade long career (1999-2009), he has played for two teams: Atlanta Falcons and Seattle Seahawks. With the Falcons, he played the Pro Bowl for the first time, while with the Seahawks, he was voted as a starter in the Pro Bowl and led the NFC in sacks with 14.5. However, he missed the Pro Bowl due to shoulder surgery, which indicated the end of his career. It was on April 13, 2010 that Kerney officially announced his retirement. In addition to being professional football player, he has also contributed to numerous funds and charity foundations helping to those in need.