Pat Summerall Net Worth: Pat Summerall was an American football player and television sportscaster who had a net worth of $10 million. Pat Summerall was born May 10, 1930 in Lake City, Florida. He also announced major golf and tennis events and, in total, announced 16 Super Bowls on network television (more than any other announcer), 26 Masters Tournaments and 21 U.S. Opens.

Summerall also contributed to 10 Super Bowl broadcasts on CBS Radio as a pregame host or analyst. Although he retired in 2002, Summerall continued to announce games on occasion, especially those near his Texas home. He was named the National Sportscaster of the Year by the National Sportscasters and Sportswriters Association in 1977 and inducted into its Hall of Fame in 1994. That same year he was the recipient of the Pete Rozelle Radio-Television Award from the Pro Football Hall of Fame. He was inducted into the American Sportscasters Association Hall of Fame in 1999. The "Pat Summerall Award" has been presented since 2006 during Super Bowl weekend at the NFL's headquarters hotel "to a deserving recipient who through their career has demonstrated the character, integrity and leadership both on and off the job that the name Pat Summerall represents. Pat Summerall was admitted into Zale Lipshy University Hospital in Dallas, Texas for surgery on a broken hip and died on April 16, 2013 of cardiac arrest at age 82. Following his death, Jerry Jones (GM of the NFL's Dallas Cowboys) referred to Summerall as "royalty in the broadcast booth" while John Madden (former football player-turned-coach-turned-broadcaster) called him "a great broadcaster and a great man" and added that "Pat Summerall is the voice of football and always will be. A few days later, CBS Sports presented a tribute to Summerall during their coverage of the RBC Heritage golf event. Sportscasters Jim Nantz and Gary McCord presented highlights of Pat Summerall's life and career-both as a player and at CBS –ending the tribute with Summerall's 1994 Masters sign-off. 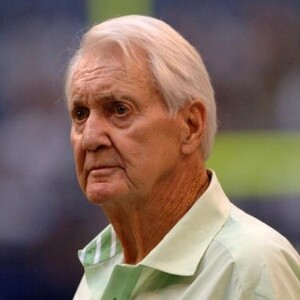