Owen Daniels net worth: Owen Daniels is an American professional football player who has a net worth of $8 million. Owen Daniels was born in Naperville, Illinois in November 1982. He is a tight end who earned PrepStar and Pro Football report All-American honors at Naperville Central High School. Daniels played his college football at University of Wisconsin where he was nicknamed "Ole Sure Hands".

He was drafted #98 by the Houston Texans in the 2006 NFL Draft. Daniels played for the Texans from 2006 to 2013 and then for the Baltimore Ravens in 2014. Since 2015 he has played for the Denver Broncos. Daniels was selected to the NFL All-Rookie Team in 2006 and is a two time Pro Bowl selection. In 2015 he won the AFC Championship with the Denver Broncos. In 2014 he signed a one year deal with Baltimore for $1 million. In 2015 Daniels signed a three year deal with Denver for $12 million. 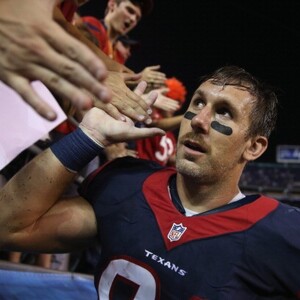