Osi Umenyiora Net Worth and salary: Osi Umenyiora is a British-born American professional football player who has a net worth of $7 million. Osi Umenyiora was born in London, England in November 1981. He lived in Nigeria and then played high school football in Auburn, Alabama. Osi played college ball at Troy University.

He was an honorable mention All-American as a senior in 2002. Osi was drafted #56 by the New York Giants at the 2003 NFL Draft. He played with the Giants until 2012. Umenyiora was the NFC sacks leader in 2005 and was named PFWA Most Improved Player of the Year. The same year he was selected to the Pro Bowl and was an All-Pro. Osi was selected to the Pro Bowl again in 2007 and named an All-Pro in 2010. He is a two time Super Bowl and NFC Champion. In October 2010 Umenyiora was named NFC Defensive Player of the Month. He holds the Giants single game sacks record with six. He also holds an NFL record for forced fumbles in a season with 10. Osi has played with the Atlanta Falcons in 2013 when he signed a two year deal with $8.55 million. He became engaged to Miss Universe 2011 Leila Lopez in 2013. 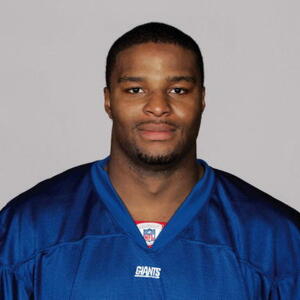