Orlando Pace Net Worth: Orlando Pace is a former American football player who has a net worth of $30 million. Born on November 4, 1975, in Sandusky, Ohio, he served as an offensive tackle in the National Football League (NFL) for thirteen seasons. Being two-sport athlete for the Sandusky Blue Streaks at Sandusky High School, young Pace had chosen football over basketball at college. While he played college football for The Ohio State University, in the period from 1993 to 1996, Orlando was twice recognized as an All-American. His early success helped Orlando to be drafted by the St. Louis Rams first overall in the 1997 NFL Draft. Since, he had played professionally for the Rams for twelve years. Statistics show that Pace started all 16 regular season games eight times in his pro career, and blocked for three straight NFL MVPs (Kurt Warner in 1999, 2001; and Marshall Faulk in 2000). Considered to be the cornerstone of a Rams offensive line, he blocked for an offense that compiled more gross yards than any other team in his twelve years in St. Louis (50,770 in 12 seasons), finished second in completion percentage (61.8 percent) and fifth in touchdown passes (289) over that time. All in all, Orlando Pace started 154 consecutive games. Concluding his career with a season for the Chicago Bears in 2009, he had been a five-time All-Pro and seven-time Pro Bowl selection. Plus, he earned a Super Bowl ring with the Rams in Super Bowl XXXIV. 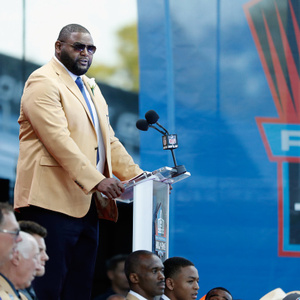