What is O.J. Simpson's net worth, salary and career earnings?

O.J. Simpson is an American football player, sports commentator and actor who has a net worth of $3 million. He is also a convicted criminal thanks to a robbery/kidnapping incident that took place in Las Vegas in 2007. Simpson was also found financially responsible for the murder of Ronald Goldman. In 1995, Simpson was found criminally not guilty for the murder of Ron Goldman and and his ex-wife Nicole Brown Simpson. He was not sued civilly for Nicole's death. As a result of the Ron Goldman civil case, OJ was ordered to pay the Goldman family $33.5 million in damages. That number has grown to over $40 million today with interest. Roughly $500,000 was paid down through the sale various assets and memorabilia.

Today O.J.'s primary sources of income is a fully-funded NFL pension that reportedly is worth as much as $5 million. State law protects this pension money from being claimed by the Goldman family.

According to legal filings submitted his 1992 divorce from Nicole, OJ at that point had a net worth of $10.8 million. That's the same as around $18 million today. Around half of his net worth came from the value of his Brentwood estate. He bought that estate in 1977 for $650,000 (roughly $2.5 million in 2016 dollars). Furthermore, the same filings showed that OJ's monthly income in 1992 was $55,000. That's the equivalent of $92,000 per month after adjusting for inflation, roughly $1.1 million per year today. The majority of that income came from his Hertz endorsement contract.

To settle the divorce, OJ agreed to pay Nicole $10,000 per month in child support plus a one-time payment of $433,750 ($730,000 after adjusting for inflation). OJ also gave Nicole a rental property in San Francisco. OJ continued to live in his Brentwood mansion until he was evicted in 1997 after defaulting on the mortgage. The 6,200 square foot house was bought in foreclosure for $4 million and demolished in 1998. 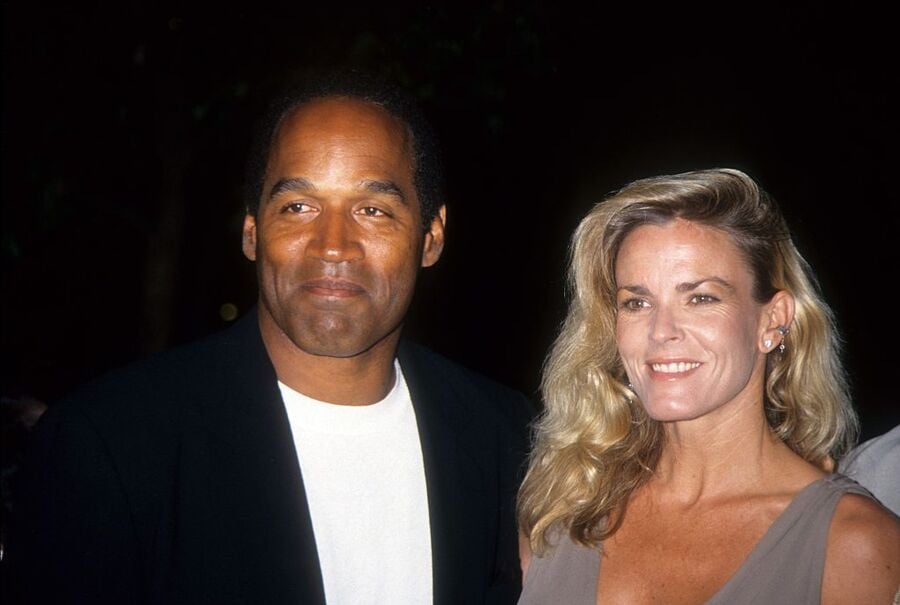 O.J. Simpson was born in San Francisco, California on July 9, 1947. He was raised there by Eunice, a hospital administrator, and Jimmy Lee Simpson, a chef and bank custodian. O.J's dad was a popular drag queen in the San Francisco Bay area who later in life announced he was gay and died of AIDS in 1986. His parents separated in 1952 and thereafter O.J. was raised by his mother. In his early teenage years, O.J. joined the street gang The Persian Warriors and was briefly incarcerated at a juvenile detention center. A chance meeting with baseball star Willie Mays inspired Simpson to clean up his life and stay out of trouble. After graduating Galileo High School, he attended community college before going to the University of Southern California on a football scholarship. At USC, he was a candidate for the Heisman Trophy as a junior, and won the award as a senior.

In 1969, Simpson was drafted as a number-one draft pick by the Buffalo Bills. Simpson demanded what was at the time the largest contract in pro sports history: $650,000 for five years. This led to tension and a standoff with the Bills' owner Ralph Wilson. Simpson threatened to skip playing pro football altogether and become an actor. Eventually, Wilson agreed to Simpson's terms. He struggled in his first three years and averaged only 622 yards per season. Finally in 1972, Simpson rushed over 1,000 yards for the first time in his pro career. In 1973, he became the first NFL player to rush for over two thousand yards in a single season. In 1975, he won the rushing title again, rushing 1,817 yards and scoring 16 touchdowns. Simpson's 1977 season was cut short due to an injury.

Before the 1978 season, Simpson was traded to the San Francisco 49ers, where he remained for two seasons. His final NFL game was on December 16, 1979 in a loss to the Atlanta Falcons. O.J.'s final play was a 10-yard run on 3rd and 10 for a first down. He played in six Pro Bowls and was inducted in the Pro Football Hall of Fame in 1985. In 2019, Simpson was named to the National Football League 100th Anniversary All-Time Team.

When he was drafted by the Bills, OJ demanded (and after a brief standoff eventually received) a 5-year $650,000 contract. That's the same as around $4.5 million today after adjusting for inflation. At the time it was the largest contract in professional sports history.

O.J. got the nickname Juice as a play on O.J., the common abbreviation for orange juice. Juice is also a synonym for electricity, hence a powerful for a powerful entity. During O.J.'s career peak, the Bills' offensive line was nicknamed The Electric Company.

Simpson was also a successful actor and television producer and commercial spokesman. Even before he retired from the NFL, he was already playing parts in TV and film. He appeared in films such as The Klansman and The Naked Gun series, the miniseries Roots, and he produced a series of TV movies in the early 1980s. Starting in the 1970s, OJ was the commercial spokesman for the Hertz car rental company. Simpson was considered by James Cameron to play the title character in The Terminator in 1984, but Cameron ultimately cast Arnold Schwarzenegger as The Terminator while Simpson was not involved in the film.

In addition to his acting career, Simpson was a commentator for Monday Night Football, which aired on ABC at that time. 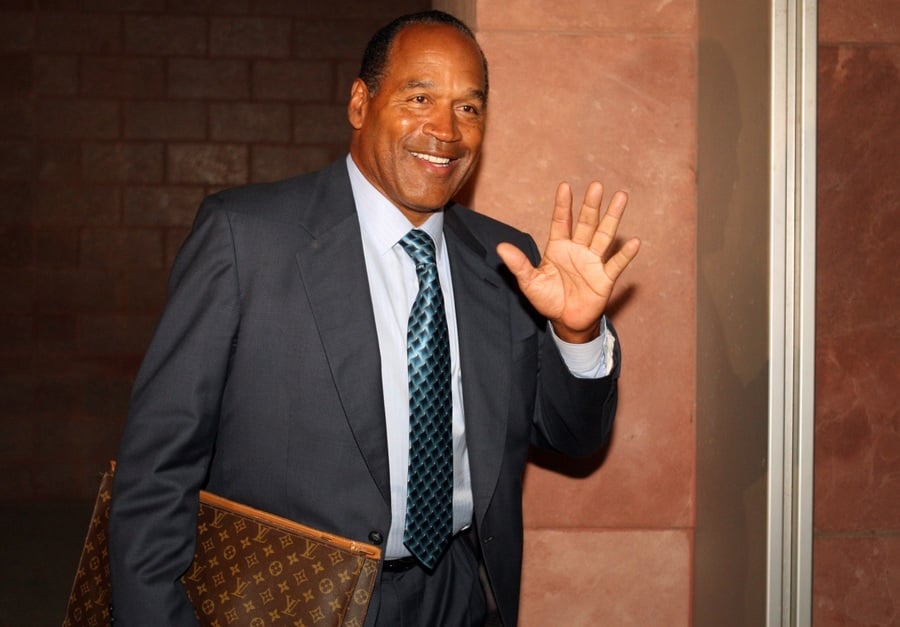 At age 19, Simpson married Marguerite Whitley. They had three children together: Arnelle, Jason, and Aaren Simpson. In August 1979, Aaren tragically drowned in the family's swimming pool.

Simpson met nightclub waitress Nicole Brown in 1977. Simpson was still married to his first wife, but the two began dating. Simpson and Whitley divorced in March 1979. O.J. married Nicole in February 1985 and they had two children, Sydney and Justin. Their marriage lasted seven years. Simpson pleaded no contest to spousal abuse in 1989. Their divorce was finalized in 1992. They made an attempt at reconciliation in 1993 to no avail.

In 1994, Simpson was charged with the murder of ex-wife Nicole Brown and her friend Ronald Goldman. They had been found stabbed to death outside Nicole's Brentwood condo on June 12, 1994. Simpson was immediately a person of interest in their murders but did not turn himself in. Five days later, on June 17, he was the subject of a low-speed chase by police while riding as a passenger in the now-infamous white Ford Bronco, driven by his friend Al Cowlings. TV stations interrupted the 1994 NBA finals to broadcast the chase live to an estimated 95 million viewers.

The arrest and trial of O.J. Simpson was one of the most publicized trials in American history. After 11 months, on October 3, 1995, the jury rendered a verdict of not guilty. An estimated 100 million people tuned in to watch the verdict announcement live. Simpson was subsequently convicted in a civil trial and was ordered to pay $33.5 million in damages to the Goldman and Brown families. To date, he has paid approximately $500,000 of those damages. With interest, OJ now owes more than $40 million.

In 2007, Simpson was arrested for stealing sports memorabilia and was convicted on charges of multiple felony counts, including criminal conspiracy, kidnapping, assault, and robbery. He was sentenced to 33 years but was released in October 2017 after being granted parole on July 20, 2017.

After he turned 55, OJ was eligible to receive a pension from the NFL. It's widely believed that OJ actually held off on taking his pension payments until he was 65 so he could receive a larger monthly payment ($10,565 per month instead of $4,034). Assuming this is true, the NFL began paying him $10,565 per month starting in 2012.

Since he could not access or use this money while he was in prison, approximately $602,000 would have built up in OJ's bank account. According to one of his close friends, OJ also reportedly has a fully funded personal pension that is worth anywhere from $2-5 million depending on how the assets were invested and performed. He also reportedly has a Screen Actor's Guild pension that pays around $1700 per month. Luckily for OJ, pension income can not be touched by bankruptcy or legal judgment so it's completely off-limits to the Goldman family. 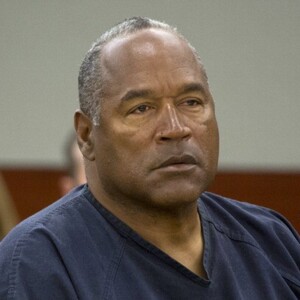