What is Odell Beckham Jr.'s net worth and salary?

Odell Beckham, Jr. is an American professional football player who has a net worth of $40 million. His annual NFL salary is $15 million. He played college football at Louisiana State University and then was drafted by the New York Giants in 2014. During his five seasons with the Giants, Odell broke numerous league and franchise records. In 2016, Beckham became the fastest player in NFL history to reach both 4,000 career receiving yards and 200 career receptions.

He is known for making spectacular one handed catches. His most famous catch, which occurred during a game on November 23, 2014, set the world on fire and inspired countless internet memes of "Thing's Odell Could Catch."

On August 26, 2018, Odell signed a 5-year, $95 million contract with the Giants that came with $65 million guaranteed. The deal made him the highest-paid Wide Receiver in the history of the NFL in two ways: 1) It topped Antonio Brown's $17 million average deal with the Steelers and 2) It topped the $55 million Tampa's Mike Evans was guaranteed.

Odell Beckham Jr. was born in 1992 in Baton Rouge, Louisiana. He has a younger sister named Jasmine and a younger brother named Kordell. His father, Odell Sr., was a star running back at Marshall High School, and played at LSU from 1989 to 1992. Beckham's mother, Heather, also attended LSU; a track runner, she ran for three national championship relay teams, and later became the coach of the Nicholls State University track and field team. Beckham himself got into sports early. As a youth, he went to Isidore Newman School in New Orleans, where he was a letterman in football, basketball, and track. During his junior year, he caught 45 passes for 743 yards and 10 touchdowns; as a senior, he recorded 50 catches for 1,010 yards and 19 touchdowns. Meanwhile, Beckham lettered all four years in basketball, and excelled as a track and field athlete in the long jump and 200-meter dash.

Turning down scholarship offers from such schools as Tulane and Nebraska, Beckham ultimately chose to play for Louisiana State University. As a freshman at LSU, he started nine of 14 games, and led the Tigers to the BCS National Championship Game. He finished the season second on the team with 41 receptions for 475 yards, and was named a freshman All-SEC selection. The next year, Beckham started 12 of 13 games, and helped LSU finish with a 10-2 record. He had an even more impressive junior year; in addition to being named a first- and second-team All-SEC selection, Beckham won the Paul Hornung Award, which goes to the most versatile player in college football. He finished the season with 57 receptions for 1,117 yards and eight touchdowns. Beckham then forwent his senior season to enter the NFL Draft.

In the 2014 NFL Draft, Beckham was selected with the 12th overall pick by the New York Giants. During a November game in his debut season, Beckham had one of the most memorable moments in NFL history when he scored a one-handed touchdown reception against the Dallas Cowboys. He finished the month with 38 receptions, 593 receiving yards, and two touchdowns. Beckham also broke a number of rookie records during his debut season, including the most consecutive games with 90 or more receiving yards. By December, he became the first NFL rookie to record at least 12 catches, 140 yards, and three scores in a single game. In the regular season finale against the Philadelphia Eagles, Beckham notched a career-high 185 receiving yards, the most made by a rookie in a game in franchise history. He finished his rookie year with 91 receptions, 1,305 yards, and 12 touchdowns in only 12 games.

Beckham's 2015 season was marked by controversy, including multiple confrontations with cornerback Josh Norman. During a matchup with the Carolina Panthers, Beckham was flagged for three personal foul penalties. In December, the NFL Disciplinary Committee suspended him for one game without pay for multiple violations of safety protocol. Despite these impediments, Beckham finished the season with career highs of 1,450 receiving yards and 13 touchdowns. More trouble came the next year, when Beckham was fined for a dance-celebration during a game against the Cowboys, and fined again for a blindside hit on safety Kenny Vaccaro during a game against the Saints. He bounced back for Week 3, and became the fastest player to reach 200 receptions, doing so in just 30 games. Beckham had a truncated 2017 season due to a fractured left ankle. He returned for his final season with the Giants in 2018, finishing with 77 receptions, 1,052 yards, and six touchdowns. 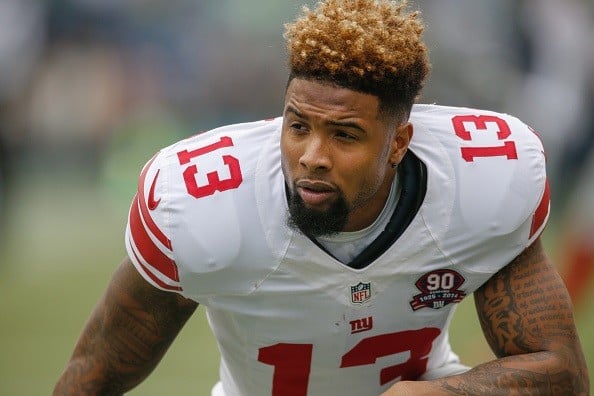 Beckham was acquired by the Cleveland Browns in March of 2019. In his first game with the team, he caught seven passes for 71 yards in a loss to the Tennessee Titans. He had better results in Week 2, finishing with 161 receiving yards and a touchdown in a victory over the New York Jets. However, Beckham quickly returned to his belligerent ways on the field when he threw a punch at Ravens cornerback Marlon Humphrey in Week 4; both men were consequently fined. Two weeks later, he incurred another fine for violating NFL uniform rules. During a Week 17 game against the Cincinnati Bengals, Beckham surpassed 1,000 receiving yards for the season.

Although things were looking up in 2020, Beckham had to leave the Week 7 game against the Bengals due to a knee injury. The next day, it was revealed that he had suffered from a torn ACL, placing him on injured reserve for the remainder of the season. Beckham finished his shortened season with 23 catches for 319 yards and three receiving touchdowns.

Beckham is in a relationship with Instagram model Lauren Wood, who first became known when she was on the MTV improv comedy show "Wild 'N Out" in 2015. Later, she appeared on the program "Ballers" with Beckham.

Involved in charity and advocacy, Beckham has helped to raise money and awareness for hunger, cancer research, and disaster relief. In 2016, he donated $500,000 in his jersey sales to help out with flooding repairs in Louisiana. The next year, he donated $100,000 of his own money to Americares and Samaritan's Purse in order to help those affected by Hurricane Harvey.

In June of 2022, Odell sold a 2-acre property with a 14,000 square-foot mansion 20 minutes outside of Cleveland for $3.3 million. The 4-bedroom home has a movie theater, golf simulator, game room and more. The master bedroom closet has a custom carved out area that can reportedly hold as many shoes as a Foot Locker. 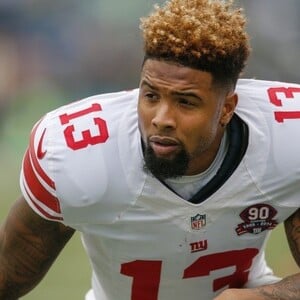