Nick Foles Net Worth and salary: Nick Foles is an American professional football player who has a net worth of $30 million. Nick Foles was born in Austin, Texas in January 1989. He is a quarterback who broke records held by Drew Brees at Austin Westlake High School. Foles played his college football for the University of Arizona and was drafted #88 by the Philadelphia Eagles in the 2012 NFL Draft.

Foles played for the Eagles from 2012 to 2014 and was traded to the St. Louis Rams where he played in 2015. During his NFL career Foles was named the Pro Bowl Offensive MVP and was the NFL Passer rating leader in 2014. He recorded the 60th Perfect Game in NFL History on November 3, 2013 against the Oakland Raiders. Foles holds NFL records for most touchdown passes in a single game with seven, Touchdown to Interception ratio in the regular season with 27:2, and passer rating in a calendar month at 152.8. In 2015 he signed a two year extension with the Rams worth $24.5 million. Foles was benched for Case Keenum in November 2015. Nick played for the Kansas City Chiefs in 2016 and was traded to The Eagles in 2017. He was originally a backup to Carson Wentz. During week 14, Foles was brought into relieve Wentz and went on to help the Eagles beat the Rams. After Wentz was ruled out for the season with a torn ACL, Foles became the starting QB. The Eagles eventually went on to beat the favored Vikings to win their division and face the Patriots in Super Bowl LII. Incredibly, The Eagles went on to defeat the Patriots which makes Nick Foles the first QB to win a Super Bowl after starting the season as a backup… since Tom Brady did it 16 years ago. 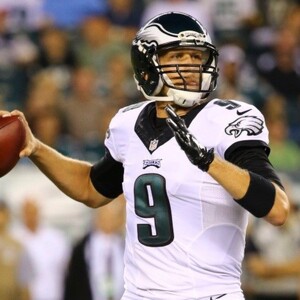