What is Ndamukong Suh's Net Worth?

Ndamukong Suh is a professional football player who has a net worth of $80 million. During his NFL career Ndamukong Suh has played for Philadelphia Eagles, Detroit Lions, Miami Dolphins, Los Angeles Rams, and Tampa Bay Buccaneers, winning Super Bowl LV with the lattermost team. Before his NFL career, Suh played football at the University of Nebraska, where he became one of the most decorated college football players in history.

During his career Ndamukong Suh has earned $170 million in NFL salary alone.

In 2010, after be drafting by the Detroit Lions as second overall draft pick, Ndamukong signed a five-year $68 million contract that came with a $40 million guaranteed. Ahead of the 2015 season he signed a 6-year $114 million deal that came with a $25 million signing bonus and $75 million guaranteed, with the Miami Marlins. That deal made him the highest paid defensive player in NFL history up to that point.

Ndamukong Suh was born on January 6, 1987 in Portland, Oregon to Jamaican mother Bernadette, an elementary school teacher, and Cameroonian father Michael, a mechanical engineer and former soccer player. He has four sisters. As a teenager, Suh went to Grant High School, where he played football, basketball, and soccer and did track and field. He excelled in all four, and set a school record in shot put.

Heavily recruited out of high school, Suh ultimately chose to attend the University of Nebraska to play football for the Cornhuskers. In his freshman year, he played in the first two games of the season before being sidelined for the remainder of the season due to knee surgery. As a sophomore, Suh played in all 14 games as a backup defensive lineman, and earned freshman All-Big 12 honors. His performance only continued to improve in his remaining two years at Nebraska. As a junior in 2008, Suh posted a team-high 76 tackles and earned first-team All-Big 12 honors. In his final year with the Cornhuskers in 2009, he recorded 85 tackles and received unanimous first-team All-Big 12 honors and the award for Big-12 Defensive Player of the Year. Suh also won a bevy of national accolades, including the Bill Willis Trophy, the Lombardi Award, and the Outland Trophy.

Suh left Nebraska as one of the top prospects in the country. In the 2010 NFL Draft, he was chosen second overall by the Detroit Lions. Kicking off his first season, he recorded his first sack against Chicago Bears quarterback Jay Cutler. On Halloween, he scored his first career touchdown in a game against the Washington Redskins. Suh finished the season as the Lions' leader in sacks, with 10; he also won numerous Rookie of the Year honors.

Despite his early success, Suh also began what would become a notorious habit of improper on-the-field behavior, resulting in many fines over the years. One of the worst incidents came on Thanksgiving in 2011, when Suh pushed the head of Green Bay Packers offensive lineman Evan Dietrich-Smith into the ground and stomped on his arm. He was suspended for two games without pay as a consequence. Suh got into trouble again on Thanksgiving in 2012 for kicking Houston Texans quarterback Matt Schaub in the groin. In 2013, he received fines for a personal foul and for making a throat-slash gesture during a game, and in 2014, his final season with the Lions, he was fined for stepping on the leg of Packers quarterback Aaron Rodgers. 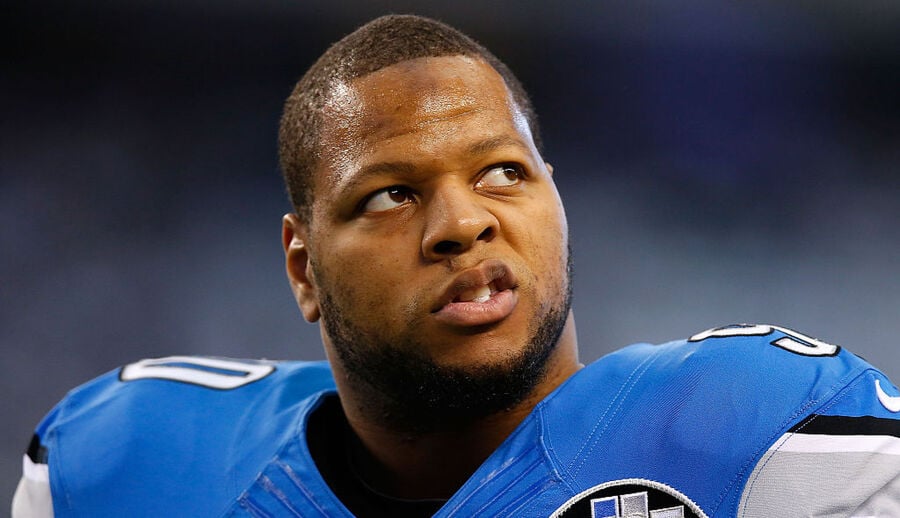 Suh signed with the Miami Dolphins in early 2015. Starting all 16 games of the season, he finished with 61 tackles and six sacks. Suh started all the games in 2016, as well, recording 72 tackles and five sacks. His last season as a Dolphin in 2017 was his weakest, with 48 combined tackles and 4.5 sacks.

In early 2018, Suh signed a one-year contract with the Los Angeles Rams. Despite yet another fine for unnecessary roughness, he had one of his best career years yet, helping the Rams advance to the NFC Championship Game and ultimately Super Bowl LIII. There, the team fell to the New England Patriots.

Suh signed with the Tampa Bay Buccaneers in the spring of 2019. In Week 4 of the season, he recorded his second career touchdown. He finished the season with 41 tackles and 2.5 sacks. Suh had a better 2020; finishing the regular season with 43 tackles and six sacks, he made it with the Buccaneers to Super Bowl LV, where the team defeated the Kansas City Chiefs 31-9. The 2021 season was less successful, with Suh posting 27 tackles.

In late 2022, Suh signed a one-year contract with the Philadelphia Eagles.

Outside of football, Suh has appeared on some reality television shows. In 2012, he was a contestant on the Fox dating game show "The Choice," and in 2013 competed on the short-lived ABC celebrity diving show "Splash."

At the annual Husker Spring Game in 2010, Suh announced a $2.6 million donation to his alma mater the University of Nebraska to go toward an athletic program and an endowed engineering scholarship. His gift was the largest single charitable contribution made by any former player to the school. Suh later donated $250,000 to his other alma mater, Grant High School.

In August 2015, the same year he signed a $114 million contract with the Miami Dolphins, Ndamukong Suh paid $6.5 million for a mansion in Fort Lauderdale, Florida. He paid all-cash for the 11,142 square foot property that spans 1.6 acres. He listed this home for sale in February 2018 for $7.3 million but ultimately accepted $5.85 million in May 2018. Here's a video tour of his former home: