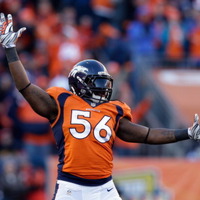 Nate Irving net worth: Nate Irving is an America football player at the linebacker position for the Denver Broncos of the NFL who has a net worth of $8 Million. Nate Irving was born in 1988 in Newark, New Jersey and played high school football at Wallace-Rose Hill High School in Teachey, North Carolina. During his senior season Nate Irving had 110 tackles, six forced fumbles, three sacks and one interception. Nate Irving played college football at North Carolina State University, where he redshirted his freshman season and made his debut in 2007, when he was one of the Wolfpack's top performers on defense with 27 of his 52 tackles made in the last four games of the season. In 2008, Nate Irving made 113 of his 136 NC State career tackles during that season, before going out for one third of the season with an injury. Nate Irving missed the 2009 season after sustaining severe injuries in a car accident during the summer. Nate Irving holes the NCAA FBS record for tackles for loss in a single game with eight of them in Game 8 of the 2010 season. Nate Irving was selected with the 67th overall pick in the third round of the 2011 NFL Draft by the Denver Broncos.