What is Mike Tirico's Net Worth and Salary?

Mike Tirico is American sports announcer who has a net worth of $14 million dollars and an annual salary of $6 million. Mike Tirico is a sportscaster who has worked for NBC Sports since 2016. During his tenure with the network, he has served as host of Olympic, Indianapolis 500, golf, and Stanley Cup coverage, and has also hosted Triple Crown races and Football Night in America. Earlier in his career, Tirico worked for ESPN covering a range of sports, including basketball, football, golf, and tennis.

Mike Tirico was born on December 13, 1966 in the Queens borough of New York City to parents Maria and Donald. He went to Bayside High School, and then to the S. I. Newhouse School of Public Communications at Syracuse University. While an undergraduate at Syracuse, Tirico served as sports director at the CBS affiliate station WTVH, and hosted his first show on WAER radio on the university's campus. His first guest on the show was Syracuse alum Bob Costas. Tirico graduated from Syracuse in 1988.

In 1991, Tirico joined ESPN as an anchor on the daily sports news program "SportsCenter." He quickly became known on the show for his versatility in covering a variety of assignments. Notably, from 1997 to 2005, he did play-by-play for ESPN's Thursday-night college football coverage. Additionally, Tirico handled college basketball coverage, NBA coverage, and golf coverage. He also did play-by-play of the NBA Finals on ESPN Radio. Among his later assignments for the network, Tirico anchored coverage of the 2009 US Open, and co-anchored coverage of the 2010 and 2014 FIFA World Cups. His last assignment for EPSN was co-anchoring UEFA Euro 2016 coverage.

After 25 years with ESPN, Tirico officially joined NBC Sports in July of 2016. He went on to have his first on-air appearance on the network during the 2016 Open Championship, calling play-by-play. Subsequently, Tirico moved up to the position of studio host on Thursday and Friday afternoons. Also in 2016, he served as a studio host on NBC's broadcasts of the Summer Olympics in Rio de Janeiro, unofficially taking over the role long held by Bob Costas. Later, Tirico did play-by-play for Notre Dame college football games, as well as for "Thursday Night Football" and "Sunday Night Football" games.

In 2017, Tirico's roles at NBC Sports began growing in prominence. Upon the announcement of Bob Costas' retirement as primetime host of NBC Olympic coverage, Tirico was officially announced as his replacement beginning with the 2018 Winter Olympics in PyeongChang. Further, Tirico replaced Costas as studio host for NFL coverage and for "Football Night in America." Later in 2017, it was announced that Tirico would be replacing Al Michaels as play-by-play commentator for all "Thursday Night Football" games, and that he would be taking over from Tom Hammond on Triple Crown coverage. He also became the full-time play-by-play announcer for Notre Dame football games. 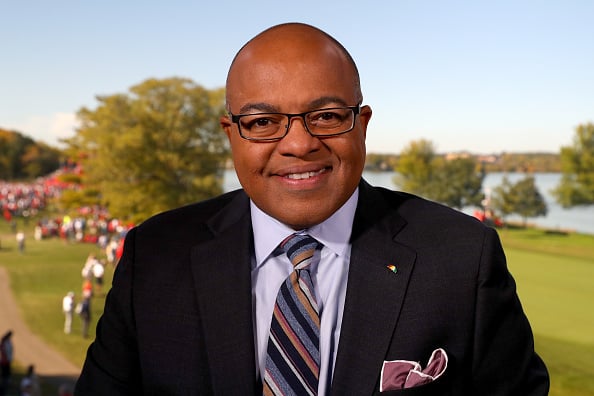 In early 2019, Tirico hosted pre-game, intermission, and post-game coverage of the NHL Winter Classic; shortly after this, he called his first NHL game on "Wednesday Night Hockey" on NBCSN. Among his later notable roles for NBC, Tirico hosted primetime coverage of the 2020 Summer Olympics in Tokyo and the 2022 Winter Olympics in Beijing. During the latter event, he traveled to Los Angeles to host coverage of Super Bowl LVI from outside SoFi Stadium.

On the radio, Tirico co-hosted the short-lived "The Mike Tirico Show" with Scott Van Pelt on ESPN Radio. He left the show in 2009 to focus more on his television obligations, and was replaced by Ryen Russillo on what was retitled "The Scott Van Pelt Show."

With his wife Debbie, Tirico has two children: a son named Jordan and a daughter named Cammi. The family has resided in Ann Arbor, Michigan since 1999.