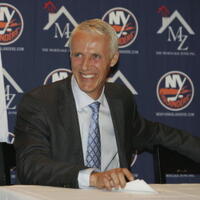 Mike Bossy net worth: Mike Bossy was a Canadian former professional hockey player who had a net worth of $12 million. Mike Bossy was born in Montreal, Quebec, Canada in January 1957. He was a right winger who was drafted #15 overall for the New York Islanders in the 1977 NHL Draft. Bossy was also drafted #44 overall by the Indianapolis Racers in the 1977 WHA Draft. He played for Laval National in the QMJHL from 1972 to 1977 and then for the New York Islanders from 1977 to 1987. He was a part of the team's four year run as Stanley Cup champions and was the only player in NHL history who has scored consecutive Stanley Cup winning goals. Bossy is also the only player in history to make four game winning goals in one series in 1983. He is the NHL all-time leader for average goals scored per regular season game among several other accomplishments. Bossy was named one of the 100 Greatest NFL Players in history in 2017. He also represented Canada in international competition and was inducted into the Hockey Hall of Fame in 1991. Unfortunately, Mike died on April 14, 2022 at the age of 65, several months after announcing he had been diagnosed with lung cancer.