What is Michael Strahan's net worth and Salary?

Michael Strahan is a retired American football player, sports analyst, and talk show host who has a net worth of $65 million. Michael Strahan played defensive end for the New York Giants for 14 seasons. Strahan is a football analyst on "Fox NFL Sunday," and co-host of ABC's "Good Morning America."

Michael Anthony Strahan was born in Houston, Texas on November 21, 1971. He is the youngest of six children of Louise and Gene Willie Strahan.  When Strahan was nine, his family moved to the Army base in Mannheim, West Germany. He played organized football at Mannheim American High School, a U.S. Department of Defense Dependent High School in Germany. During the summer between his junior and senior years of high school, his dad sent him back to Houston to live with his uncle Art, a former NFL player, so he could play football during the fall semester. This move enabled Strahan to receive a football scholarship from Texas Southern University.

Strahan played college football at Texas Southern University. He was a defensive end. Strahan started to get attention as an NFL prospect in his junior season. As a senior, he was selected All-America first team by four outlets including the Associated Press. He was also selected Division I-AA Defensive Player of the Year by a number of outlets. During his senior season in the 1992-1993 school year, he was named to the Southwestern Athletic Conference's First Team, he was SWAC's Player of the Year for the second consecutive season, and he was named the Black College Defensive Player of the Year.

Michael Strahan played defensive end for the New York Giants for 14 seasons. He was selected by the Giants as the 40th pick in the second round of the 1993 NFL Draft. Michael went on to enjoy an incredibly successful professional career. He is a seven-time Pro-Bowl selection and a member of the Super Bowl-winning 2007 Giants. He holds the record for the most sacks in a single season and holds the distinction of being a two-time NFC Champion and the 2001 NFL Defensive Player of the Year. He retired from the NFL in 2007.  In 2014, he was inducted into the Pro Football Hall of Fame and he is also in the New York Giants Ring of Honor and was named to the NFL 2000s All-Decade Team.

Since his retirement from the NFL,  Strahan has been appearing as an analyst on Fox NFL Sunday and hosted the show, Pros vs. Joes. In 2008, Strahan was the host of the home improvement program Backyard Stadiums on DIY Network, in which he and a team of contractors and gardeners laid out sports courses and goals in backyards.

In 2012, Strahan was selected to replace Regis Philbin and become the co-host of the newly named "Live! with Kelly and Michael." Strahan left Live! in 2016 after earning two Daytime Emmy Awards for the show. He left to become a full-time host of "Good Morning America." He began hosting the television game show "The $100,000 Pyramid" in 2016.

He wrote the book "Wake Up Happy: The Dream Big, Win Big Guide to Transforming Your Life" in 2015. 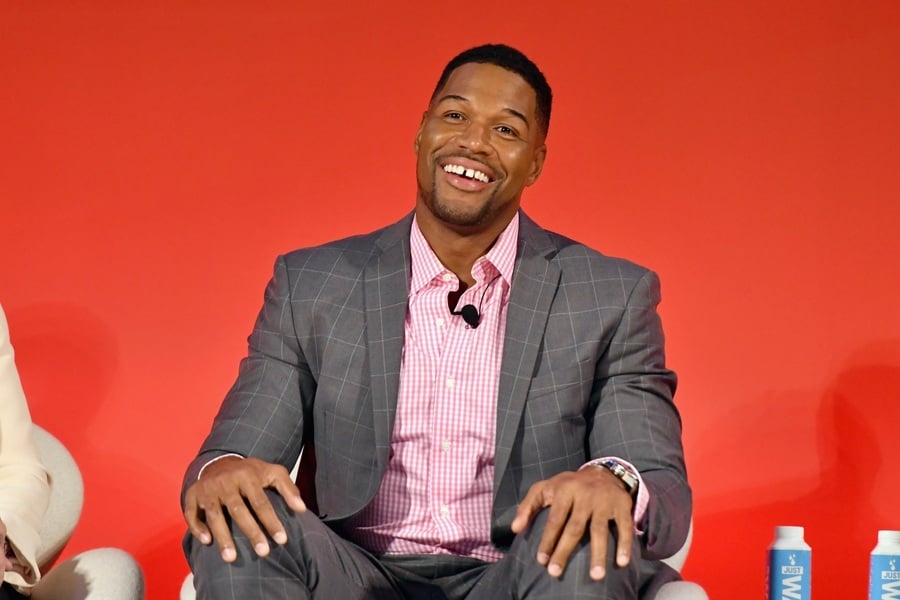 Michael Strahan married Wanda Hutchins in 1992. They have a daughter, Tanita Strahan, and a son, Michael Anthony Strahan, Jr. They divorced in 1996.

In 1999, Strahan married Jean Muggli after meeting her at a spa. They have twin daughters, Isabella and Sophia who were born in December 2004. Strahan and Muggli finalized their acrimonious divorce on July 20, 2006. According to divorce court filings, Michael was worth $22 million at the time. In the end, a judge ordered Michael to pay Jean $15.3 million AND $18,000 per month in child support until their daughters turn 18.

In August 2009, Strahan became engaged to Nicole Mitchell Murphy, Eddie Murphy's ex-wife, but the two ended their engagement in 2014.

From his various hosting duties and endorsement deas, Michael typically earns around $17 million per year today. During his NFL career, Michael earned just under $60 million in salary alone. His highest-earning year in the NFL was the 2002-2003 season when the Giants paid him $20.6 million.

During his 2007 divorce proceedings from Jean Muggli, the court ordered their Montclair, New Jersey mansion to be auctioned and the sales money split evenly; the house was valued at $3.6 million.

In 2015, Strahan sold his mansion in the Los Angeles neighborhood of Brentwood for $21.5 million. Built in 2013, the 15,600-square-foot home sits on a one-acre lot with a 59-foot swimming pool, an expansive lawn, and mature trees. The three-story home includes a library, a home theater, a Prohibition-style wine cellar with a drinking lounge, a gym, a game room, a sauna, and two laundry rooms. The master wing includes a sitting room with a fireplace. There are nine bedroom suites and 14 bathrooms. He bought the home in 2013 for $16 million while he was engaged to Nicole Mitchell Murphy.