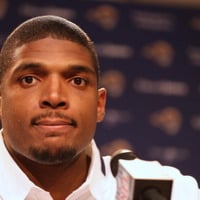 Michael Sam net worth: Michael Sam is an American football player who has a net worth of $100 thousand dollars. Michael Sam was born in Galveston, Texas, and first distinguished himself as a football player while in high school. He earned first-team All-District honors for all four years of his high school career as a defensive lineman, and also as an offensive lineman his last two years of high school. He went on to play football for the University of Missouri, after turning down offers from Arizona State, Colorado State, and the University of Houston. As a collegiate football player, he was named SEC Co-Player of the Year in 2013. He also led the SEC in sacks and tackles for loss in 2013. He was a first-team All-SEC selection, and multiple football organizations and publications named him a first-team All-American selection. In early 2014, he came out as gay. When/if he is drafted into the NFL, he will become the first openly gay active player in NFL history.