Michael Robinson net worth: Michael Robinson is an American football player at the fullback position for the Seattle Seahawks who has a net worth of $14 million. Michael Robinson was born in 1983 in Richmond, Virginia where he attended Varina High School and played quarterback as a four-year starter. Michael Robinson led his high school team to four consecutive regional titles and two state runner-up finishes.

He rushed for 3,046 yards on 371 carries, an 8.2 average, and 37 touchdowns, while passing for 2,409 yards in his high school career and was also a sprinter on the track team. Michael Robinson played college football for the Penn State Nittany Lions where he moved around, playing quarterback, running back, slot back, and split end. He was Penn State's second leading rusher in his freshman season in 2002. In 2003, Robinson started eight games with three at quarterback and five at tailback. In 2004, Michael Robinson started in eight games. In 2005 Michael Robinson was named Big Ten Conference Offensive Player of the Year and became the first player in Penn State history to throw for over 2,000 yards and rush for over 500 yards in the same season. Michael Robinson was selected with the 100th overall pick in the fourth round of the 2006 NFL Draft by the San Francisco 49ers. He was converted to running back by the 49ers and finished his rookie season with 38 carries for 116 yards as well as nine receptions for 47 yards and two touchdowns. He played for San Francisco for four seasons and was released by the 49ers at the end of the 2010 preseason schedule on September 3, 2010. The Seattle Seahawks signed Michael Robinson three days later. 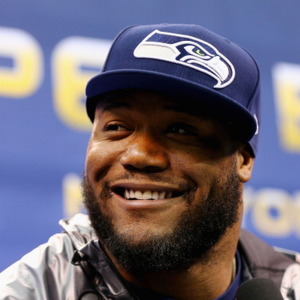