What is Michael Oher's Net Worth and Salary?

Michael Oher is an American football offensive tackle who has a net worth of $16 million. Oher's personal story was chronicled in the Academy Award-winning 2009 film "The Blind Side" starring Sandra Bullock and Tim McGraw. Michael's role was played by Quinton Aaron.

Michael Oher was born May 28, 1986 in Memphis, Tennessee. Oher was born to Denise Oher, who was an alcoholic and crack cocaine addict, and a father, Michael Jerome Williams, who was frequently in prison. Due to his upbringing, he received little attention or discipline during his childhood. He repeated both first and second grades and attended eleven different schools during his first nine years as a student. He was placed in foster care at age seven, and alternated between living in various foster homes and periods of homelessness. Oher's biological father was a former cellmate of Denise Oher's brother and was murdered in prison when Oher was a senior in high school. A young Michael Oher was finally taken in by Sean Tuohy and Leigh Anne Tuohy when he was 16, and the Tuohys became Oher's legal guardians when he was 17. They hired Oher a tutor, who worked with him on schoolwork for 20 hours a week.

Oher began playing football during his freshman year at a public high school in Memphis. In his junior year, Oher began to excel in football. Oher was named Division II Lineman of the Year in 2003 and First Team Tennessee All-State. He also earned two letters each in both track and basketball. By the beginning of his senior year, Oher was the starting left tackle on the varsity football team. He was a state runner-up in the discus as a senior. Oher's low grades were initially a barrier to his acceptance to an NCAA program, but he eventually increased his 0.76 GPA to a 2.52 GPA in order to attend a Division 1 school. He did this by taking online classes from Brigham Young University and replacing his Ds and Fs earned in earlier classes with As until he finally raised his graduating GPA over the required minimum. He quickly became a top football prospect in the state of Tennessee, which led to multiple scholarship offers from Division 1 schools. He ultimately chose to play college football with the Ole Miss Rebels at the University of Mississippi, but he had received scholarship offers from Tennessee, LSU, Alabama, Auburn, and South Carolina.

Oher started in ten games as a guard during his premiere season with the Ole Miss Rebels. He quickly became a first-team freshman All-American. After he shifted to the position of left tackle for the 2006 season, Oher was named to various preseason All-Conference and All-American teams. He was also named a second-team Southeastern Conference offensive lineman after his second year, and was named a first-team SEC offensive lineman after his junior year. Oher also thrived academically at Ole Miss and his tested IQ score increased by 30 points between when he was measured growing up and then measured in college. He made the honor roll in his sophomore year.  In January 2008, Oher declared he would be leaving school to enter the 20008 NFL draft. However, he announced his withdrawal from the draft just two days later to return to Ole Miss for his senior year. After the 2008 season, Oher was recognized unanimously as first-team All-American, and made the honor roll for the second time in his college career. He graduated with a degree in Criminal Justice in the spring of 2009. He walked away from his college football career with over a dozen awards and prestigious honors for the sport. 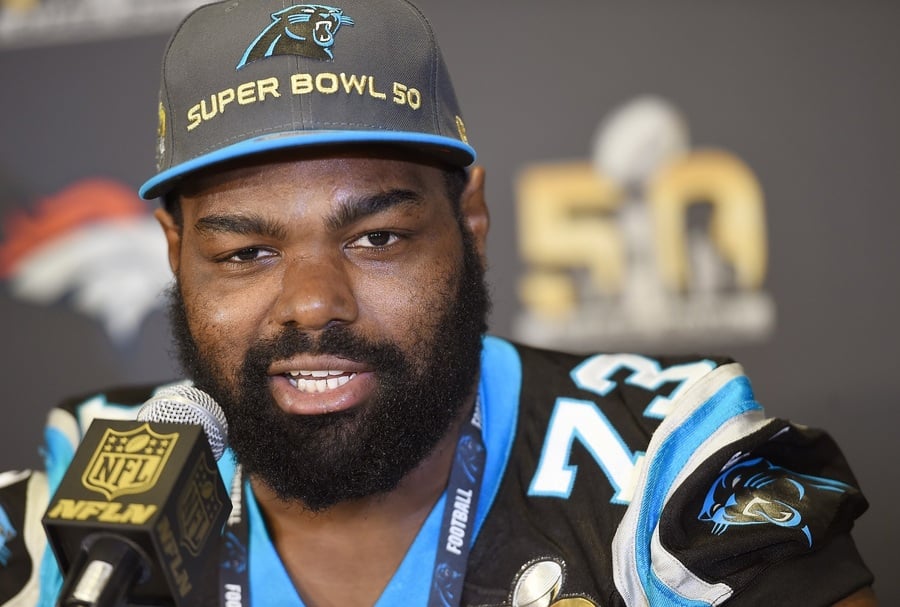 Even before he graduated, Oher was already projected as one of the top prospects for the 2009 NFL Draft. The Baltimore Ravens drafted Oher with the 23rd pick in the first round of the 2009 NFL Draft. The Ravens had acquired the pick from the New England Patriots in exchange for their first and fifth round draft picks. His adoptive family, the Tuohys, were able to be there to witness his draft day selection. On July 30, 2009, he signed a five-year, $13.8 million dollar contract with the Ravens. He started the 2009 season as a right tackle but was moved to left tackle after an injury to lineman Jared Gaither, and in eight weeks Oher returned to right tackle. Oher started every game in 2009, switching between right and left tackle. In his first post-season game in January 2010 against the New England Patriots, he played right tackle and did not allow a single sack, helping the Ravens to a 33-13 win. Oher was second in the voting for the Associated Press' NFL Offensive Rookie of the Year Award with six votes. In February 2013, Oher won his first Super Bowl ring after the Ravens defeated the San Francisco 49ers 34-31 in Super Bowl XLVII.

In March 2014, Oher signed a four-year, $20 million dollar contract with the Tennessee Titans. He started eleven games for the Titans and was placed on injured reserve on December 13, after he missed two prior games due to a toe injury. He was named the 74th best tackle out of 78 by Pro Football Focus for the 2014 season. Oher was released by the Titans on February 5, 2015.

One month later, he signed a two-year, $7 million dollar contract with the Carolina Panthers. Oher cited Cam Newton as an influential factor in his decision to sign with Carolina and ended up playing one of his best seasons as a professional, protecting Newton's blind side. He was the starting left tackle going into the season, despite his struggles in Tennessee, with the Panthers GM Dave Gettleman stating: "We did our homework on Michael, and we feel very strongly that he can be an answer for us. He'll be inserted at left tackle, and we'll go from there." Oher played in 98.4% of the team's snaps and was penalized only three times for 25 yards.

Oher was part of the Panthers team that played in the Super Bowl on February 7, 2016, falling to the Denver Broncos by a score of 24-10.

In June 2016, Oher signed a three year contract extension with the Panthers worth $21.6 million with $9.5 million guaranteed. He suffered a concussion just three games into the season and was placed on injured reserve on November 25, 2016. He was unfortunately released by the Panthers on July 20, 2017 after a failed physical.