Michael Huff net worth: Michael Huff is an American football player at the safety position for the Denver Broncos who has a net worth of $15.2 Million. Michael Huff was born in Irving, Texas in 1983 where he played football for three years and ran track all four years at Nimitz High School. He was a wide receiver, cornerback, and safety for his high school team and his jersey No. 23 was retired by Nimitz High School. Michael Huff played college football at the University of Texas at Austin under Coach Mack Brown from 2002 to 2005. Michael Huff was a unanimous first-team All-American in 2005 and won the Jim Thorpe Award as the country's best defensive back. In the 2005 BCS National Championship game at the Rose Bowl between USC and Texas it was Michael Huff who recovered the ill-advised lateral fumble from Reggie Bush, and who prevented Lendale White from getting a first down in the crucial fourth-and-two with USC leading late in the 4th quarter that turned the momentum in the Longhorns' favor leading to a National Title for Texas. Michael Huff was selected with the seventh overall pick in the first round of the 2006 NFL Draft by the Oakland Raiders. Michael Huff played for the Oakland Raiders from 2006 to 2010, spent a little time with the Baltimore Ravens in 2013 before moving on to the Super Bowl bound Denver Broncos early in the 2013 season. 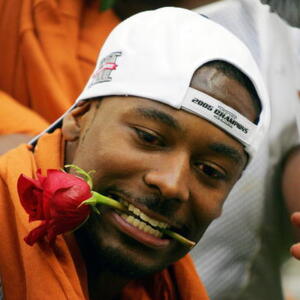