What is Matthew Stafford's net worth and salary?

Matthew Stafford is an American professional football quarterback who has a net worth of $80 million. In college, he played for the University of Georgia Bulldogs, and was then drafted by the Detroit Lions in a first-round pick in 2009. Among his many distinctions, Stafford became the fourth quarterback in NFL history to throw for over 5,000 yards in a single season, and was the fastest player to reach 40,000 career passing yards.

Matthew Stafford was born in 1988 in Tampa, Florida to parents Margaret and John. He has a younger sister named Page, and grew up in Dunwoody, Georgia while his father was in graduate school at the University of Georgia. Later, the family moved to Dallas, Texas, where Stafford attended Highland Park High School and was coached by Randy Allen. In 2005, Stafford led his team to a perfect 15-0 record, and ultimately won the UIL 4A Division I State Championship. At the time, Stafford was considered to be one of the best high school quarterbacks in the nation, and was ranked by Rivals.com as the number one professional-style quarterback prospect.

Graduating early from high school in 2006, Stafford enrolled at the University of Georgia, where he became the first freshman quarterback to start for the Georgia Bulldogs since 1998. Late in the opener of the 2006 season against Western Kentucky, Stafford passed for 40 yards in a 48-12 victory. The rest of the season was inconsistent for the team; following two home losses, head coach Mark Richt named Stafford the starter for the rest of the season. He completed 20 of 32 passes for 267 yards and two touchdowns, winning over Mississippi State. Stafford had the best game of his season against the Auburn Tigers, finishing the game 14 of 20 for 219 yards and a touchdown, winning 37-15. He completed his freshman season with an upset victory over Virginia Tech, finishing with 1,749 passing yards and seven touchdowns.

For the 2007 season, Stafford and Georgia accomplished a major feat when they defeated Florida, Auburn, and Georgia Tech, the first time the Bulldogs had triumphed over all three rivals in one season since 1982. Overall, Stafford helped lead the team to an 11-2 record over the season. When Georgia entered the 2008 season, it did so with the longest active winning streak among the 66 BCS conference teams. Stafford finished the season with a conference-leading 235 pass completions for 3,549 passing yards, the second most in the history of the school. Forgoing his senior season, Stafford went on to enter the NFL Draft.

Becoming the first overall pick of the 2009 NFL Draft, Stafford signed a six-year contract with the Detroit Lions valued at $78 million. Consequently, he became the first Lions rookie quarterback to start in Week 1 since 1968. In November, Stafford threw five touchdowns in a 38-37 victory over the Cleveland Browns, making him the youngest quarterback ever to accomplish that feat. In addition, he racked up 422 passing yards, a record for a rookie at the time. For his performance, Stafford earned the NFC Offensive Player of the Week. 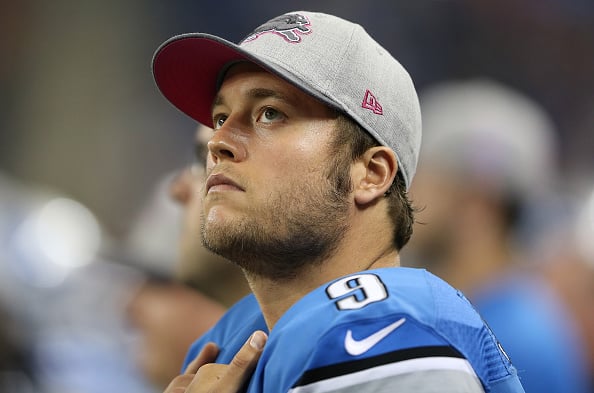 Over his 12 years with the Lions, Stafford set numerous records. In 2012, he became the fourth quarterback in NFL history to throw for 5,000 passing yards in one season, after he recorded a career-high 520 passing yards against the Green Bay Packers. He also became the fastest player in NFL history to reach 40,000 yards, doing so in 147 games. Additionally, Stafford holds the NFL record for the most comeback wins in a single season, scoring eight in 2016. He ranks in the all-time top 20 in pass attempts, completions, passing yards, and passing touchdowns, and ranks third of all time in passing yards per game. In 2017, after he signed a $135 million contract extension, he became the highest-paid player in NFL history up to that point.

In March of 2021, Stafford was traded to the Los Angeles Rams in a package deal with quarterback Jared Goff, who was a 2021 third-round pick and a first-round pick for 2022 and 2023.


While at the University of Georgia, Stafford met cheerleader Kelly Hall, the sister of former NFL player Chad Hall. The two married in 2015, and have four daughters.

In Michigan, Stafford and Hall resided in a 12,000-square-foot mansion in Bloomfield Hills. The five-bedroom and seven-bathroom estate featured the largest infinity pool in the state of Michigan; it included a cascading waterfall over the side. The home also boasted an indoor half-basketball court, and a dining room with a glass floor overlooking a temperature-controlled wine cellar. In 2016, the couple remodeled the house, adding polished granite floors, fireplaces, a glass elevator, balconies, an entertainment area, and a marble bathroom attached to the master suite. Stafford and Hall relisted the mansion for $6.5 million in January of 2021.

Only a week after his trade to the Rams, Stafford purchased a $19.6 million spec home in the gated community of Hidden Hills, California. Developed by EGC Real Estate Group and designed by architecture firm 64North, the residence spans around 15,000 square feet, and boasts a theater, gym, massage room, two wine rooms, a guest house, and a six-car garage.

In April 2022 Matthew expanded his Hidden Hills footprint with a unique $11 million purchase located a mile away from the previously-mentioned property. For $11 million, which was $3.6 million over-asking, Matthew acquired two of the three homes that formerly made up Drake's Yolo Estate. Matthew acquired the two neighboring ranch homes that Drake added to the property in the years following his original 2012 purchase of the primary "Yolo Estate" mansion. 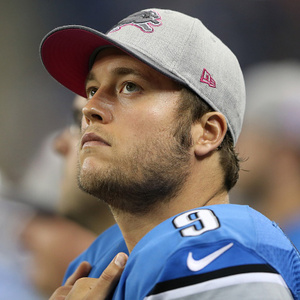