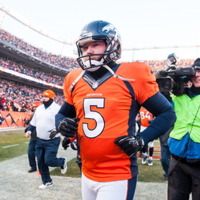 Matt Prater net worth and salary: Matt Prater is an American professional football player who has a net worth of $4 million dollars. Matt Prater was born in Mayfield Heights, Ohio, and went on attend Estero High School in Estero, Florida. While at Estero, he was a second-team All-State, first-team All-Conference and All-Southwest Florida selection. He went on to play college football for Central Florida University. He led the nation in punting his sophomore year of college, and went on to tie the school field goal record of 50 field goals, by the time he graduated. He signed with the Detroit Lions in 2006, and then with the Miami Dolphins and the Atlanta Falcons in 2007. In 2008, he signed with the Denver Broncos and seemed to hit his stride. Since signing with the Broncos, he has been named AFC Special Teams Player of the Week three times, and Player of the Month once. He is a 2013 Pro Bowl Selection and a 2013 AFC Champion. On December 8, 2013, he set the NFL Record for longest field goal with a 64-yard goal. He also set the NFL record for most extra points in a single season with 75.