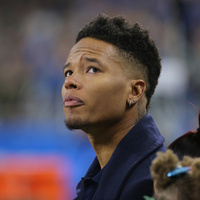 Marvin Jones net worth: Marvin Jones is an American professional football player who has a net worth of $10 million. Marvin Jones was born in Long Beach, California in March 1990. He is a wide receiver who was a Super Prep magazine All-American at Etiwanda High School. Jones played his college football for the University of California, Berkeley where he was Honorable Mention All-Pac-12. He was drafted #166 overall by the Cincinnati Bengals in the 2012 NFL Draft. Marvin Jones played for the Bengals from 2012 to 2015 and joined the Detroit Lions in 2016. During his first six NFL seasons he had 347 receptions for 5,047 receiving yards and 42 receiving touchdowns. In college he had 156 receptions for 2,270 receiving yards and 13 touchdowns. He was only able to play in nine games during the 2019 season after being injured with an ankle injury.

Contract: Jones signed a five year $40 million deal with the Lions in 2016. The contract came with an $8 million signing bonus and $20 million in guaranteed money. He will earn an average annual salary of $8 million from the deal.