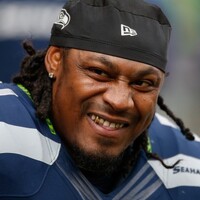 What is Marshawn Lynch's net worth and salary?

Marshawn Lynch is an American professional football player who has a net worth of $35 million. He was drafted by the Buffalo Bills in the 2007 NFL Draft after playing college football at the University of California, Berkeley. He currently holds the Cal record for most 100-yard rushing games, with 17.

During his NFL career Marshawn Lynch earned a total of $56 million in salary alone. He earned at least $10 million, and perhaps as much as $20 million from endorsements, giving him a total career earnings range of $66 – 76 million.

In 2016, a few years before his final NFL season, Marshawn revealed that he had not yet spent a dime of his NFL earnings and instead had managed to live entirely off his endorsement income.

Marshawn Lynch was born on April 22, 1986 in Oakland, California. He began playing youth football in Oakland at an early age. Marshawn and his three older siblings were raised by his mother Delisa, who once held a 200-meter track record at Oakland Technical High School. He also later attended Oakland Technical High School where he excelled on the football field. After high school Marshawn played at UC Berkeley where he was a social welfare major. In college he was a First Team All-American and First Team All-Pac-10 and Bowl MVP all in 2006.

In 2007 Marshawn announced that he intended to skip his senior year at Berkeley to enter the NFL draft. Marshawn Lynch was drafted by the Buffalo Bills as the 12th overall pick in the first round. His first contract with Buffalo was worth $19 million over six years with a $3 million signing bonus. Lynch would play for the Bills from 2007-2010 before being traded to the Seattle Seahawks.

As a member of the Seahawks, Marshawn turned into a superstar. Lynch has earned the nickname "Beast Mode" which is the term Marshawn has used to describe himself when he is in a game. Marshawn even went so far as to trademark "Beast Mode". In his first career playoff game, against the New Orleans Saints on January 8, 2011, Lynch scored a 67-yard touchdown run in which he broke nine tackles. This run became locally known as the "Beast Quake." He started 15 games in 2011, missing only one regular season game due to back problems.

In 2012 he signed a four-year deal for $31 million with Seattle. On January 24, 2012, Lynch was added to the NFC Pro Bowl roster to replace San Francisco 49ers running back Frank Gore. He started all 16 regular season games that year as well as the two playoff games the Seahawks were in. In 2013, he earned a reported six-figure income from licensing "Beast Mode" and he donated 100% of those proceeds to charity. He was ranked as the 24th best player in the league among his peers on the NFL Top 100 Players of 2013, with 98 rushing yards and two rushing touchdowns in Week 2 of the season. In week two of this season, Lynch scored a career-long 79-yard touchdown run against the Arizona Cardinals. Four days later, Lynch was fined $11,050 by the NFL for his celebration of the score; falling back while extending the ball behind his head and grabbing his crotch. The league considered his celebration an "obscene gesture."

In 2015, Lynch signed a two-year extension for $24 million. He made headlines at Super Bowl XLIX Media Day on January 27, 2015, when he held a five-minute press conference, only to just answer with "I'm just here so I won't get fined" to every question. He has a history of unwillingness to talk to the media. 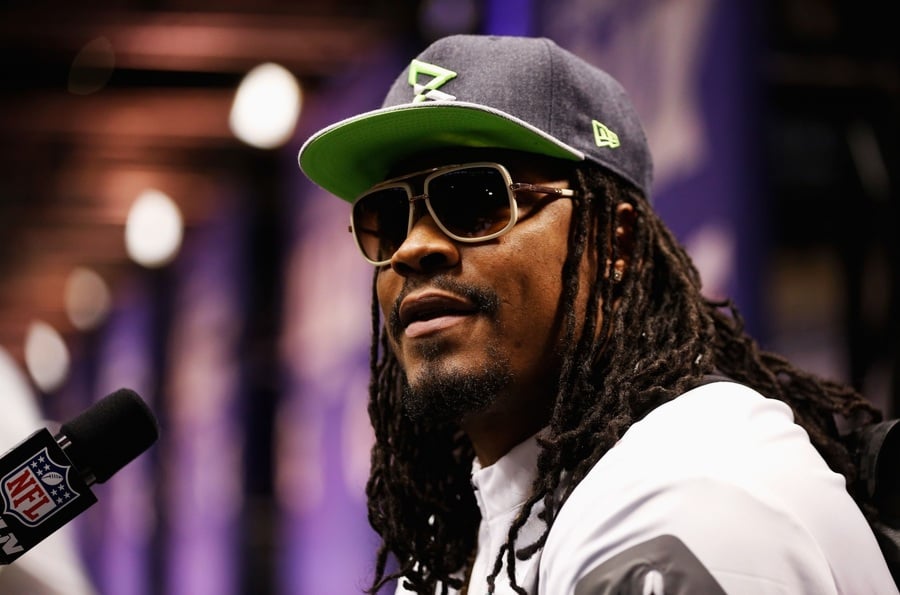 In 2019, Lynch returned to the NFL during the final week of the regular season, signing with the Seahawks for a second stint alongside former teammate Robert Turbin. He made his second debut with the Seahawks in Week 17 against the San Francisco 49ers on "NBC Sunday Night Football." During the game, Lynch rushed 12 times for 34 yards and a touchdown in the 26–21 loss. With three additional playoff touchdowns in the 2019-2020 NFL playoffs, Lynch moved into fourth place on the all-time postseason rushing touchdown list, tying him with Terrell Davis and John Riggins at #12. During a postgame interview on January 12, 2020, he was asked if he would be returning to the Seahawks for the 2020 season. He responded, "We'll see what's happening." In a December 2020 interview with Conan O'Brien, Marshawn expressed that teams have shown interest in him and that he is willing to sign with a team that is a Super Bowl contender.

Outside of his football career, Lynch also appeared in an episode of "The League"'s seventh season on FX. He also played a spoof of himself in the "Brooklyn Nine-Nine" season 4 episode "The Fugitive Part 1." Lynch was cast in May 2019 as a member of the third season of the HBO drama "Westworld." The show premiered in 2020.

Lynch talks about his affinity for Applebee's in interviews, and his teammates joke that he loves chain restaurants. He is also well known for his frequent community involvement. He was featured in 2013 in Red Bull's "Athletes Give Back" campaign, in which he put together a successful food drive for his hometown. He is universally loved and respected by his teammates for his kindness and benevolent nature.

Lynch was frequently spotted munching on Skittles during games, a habit which started when he was in high school and which led him to an official deal with Skittles in 2014. The agreement stated that in addition to personal compensation, $10,000 would be donated to his Fam First Foundation for each touchdown he scored in Super Bowl XLVIII. The Mars company offered him a two-year supply of Skittles and a custom dispenser for his locker when he was shown eating the candy during a nationally televised game in 2011.