Marques Colston Net Worth and salary: Marques Colston is an American professional football player who has a net worth of $40 million. Born in Harrisburg, Pennsylvania, in 1983, Marques Colston turned down a scholarship offer from the University of Missouri to play college football at Hofstra. The wide receiver finished his collegiate career with 182 catches for 2,843 yards and 18 touchdowns, setting a school record for receiving yards.

The New Orleans Saints chose Colston in the seventh round of the 2006 NFL Draft. Despite his late draft position, Colston went on to set an NFL record for most catches in a player's first two seasons as he hauled in 168 passes. The seventh-rounder leads the Saints in receiving yards, yards from scrimmage, total receptions, receiving touchdowns, and total touchdowns. As of the end of 2013, Colston has tallied 607 receptions for 8,337 yards and 63 receiving touchdowns. He won the 2013 Ed Block Courage Award and was named NFL Rookie of the Month on Offense in October 2006. Colston caught seven passes for 83 yards as the Saints went on to defeat the Indianapolis Colts, 31-17, in Super Bowl CLIV in Miami. Colston owns the Professional Indoor Football League's Harrisburg Stampede and lives in Luling, Louisiana. 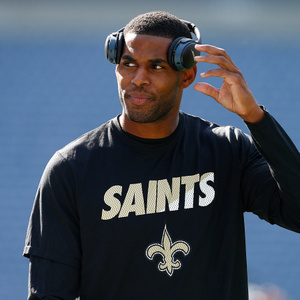