Mark Schlereth net worth: Mark Schlereth is a sports broadcaster and former professional football player who has a net worth of $6 million dollars. Born in Anchorage, Alaska, Mark Schlereth played football all through high school, but was not really on anyone's radar as far as college football recruiting. The University of Idaho offered him a scholarship, and he quickly proved himself worthy of notice.

He was drafted by the Washington Redskins in 1989, and played successfully for the team until 1994. He then played for the Denver Broncos until 2000. Though considered an all-around solid player, he is most widely recognized for the incredible number of surgeries he underwent, 29 in all, in order to continue playing. Fifteen of the surgeries were to repair his left knee, which doctors said was in the worst condition they had ever seen. After leaving football in 2000, he worked as a sports analyst on the radio. He began working for ESPN in 2004, and now works as an analyst or host for "NFL Live", "Sportscenter", and a number of other NFL programs. He also recurred as Detective Roc Hoover, on "Guiding Light". 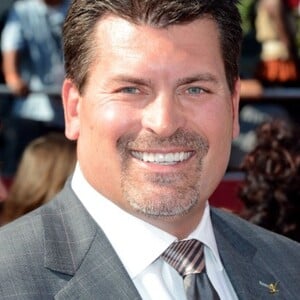