How much is Mark Gastineau Worth?

Mark Gastineau Net Worth: Mark Gastineau is a former American professional football player who had a net worth of $3.5 million dollars. Born in Ardmore, Oklahoma, in 1956, Mark Gastineau attended Eastern Arizona Junior College and Arizona State University before landing at East Central University as a defensive end. In college, Gastineau tallied 27 sacks and was part of the 1979 Senior Bowl. He became the first NFL draft pick for the school and was selected during the second round of the 1979 NFL Draft by the New York Jets. The five-time Pro Bowler was a member of the "New York Sack Exchange" alongside Marty Lyons, Abdul Salaam and Joe Klecko. In ten years, Gastineau notched more than 107 sacks, setting the all-time franchise record, and became famous for his sack dance, which was eventually declared unprofessional by the league office.

In 1987, Gastineau became the first member of the Jets to cross the picket line as part of the NFL players' strike, leading to several altercations with teammates. He retired as the NFL's all-time sack leader in 1988. He failed at a comeback attempt in the Canadian Football League in 1990 and began boxing a year later. Gastineau went 15-and-2 before his retirement from the ring five years in. His first wife and their daughter starred in their own reality show, "The Gastineau Girls", and he has a son with actress Brigitte Nielsen. Gastineau spent nearly a year on Rikers Island for violating parole stemming from drug possession and domestic violence charges. Since then, he has touted his renewed religious faith with appearances on "The 700 Club".

Personal Life: Mark was married to Lisa Gastineau from 1979 to 1991. They have two children together, including reality star Brittny Gastineau. 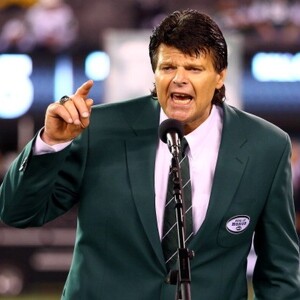