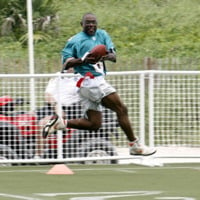 Mark "Super" Duper is a former football wide receiver for the Miami Dolphins who has a net worth of $500 thousand. Mark Duper was born in Moreauville, Louisiana in 1959. He played college football at Northwestern State University where he was in the Omega Psi Phi Fraternity. He also ran track at Northwestern State and was the NCAA 400-meter relay champion in 1981. Mark Duper was chosen in the second round of the 1982 NFL Draft by the Miami Dolphins. He is widely known by the nickname "Super Duper" and played for the Dolphins for 11 seasons. His best seasons where when he was paired up with NFL Hall of Fame quarterback Dan Marino and wide receiver Mark Clayton. Duper and Clayton were referred to as the "Marks Brothers" wide receiver tandem. Mark Duper was selected to the Pro Bowl in 1983, 1984 and 1986. He had his best season in 1984 when he had 71 catches for 1306 yards and eight touchdowns and in 1986 where he pulled in 67 catches for 11 touchdowns. Super Duper had four 1,000 yard seasons. In 1988 Duper was suspended by the NFL for 30 days for being in violation of its drug policy. After retiring in 1993, Duper was charged with conspiracy and intent to distribute cocaine. He was acquitted one year later. In March 2013, Duper was charged for beating his 17-year old son at their home in Jacksonville, Florida. Duper revealed that he has been diagnosed with chronic traumatic encephalopathy (CTE) in November 2013. Mark Duper (alongside Mark Clayton) was inducted into the Miami Dolphins Honor Roll in 2003.