His professional career began in 2006, when he was drafted into the Houston Texans and in his first year he accumulated one forced fumble, a total of 47 tackles and 4.5 sacks. He tackled Miami Dolphins quarterback, Dante Culpepper, behind the line of scrimmage for his first sack and a half. That was the first winning game for the Houston Texans in that season. In 2007 he had accumulated 59 tackles and 14 sacks. In 2008 Mario Williams was selected for his first pro bowl and was selected again after the 2009 season. In 2010 Williams suffered from an inflamed hernia and in 2011 he was placed on injured reserve, after he suffered a torn pectoral muscle. That same year, William's contract with the Houston Texans ended and he became a free agent. In 2012 he signed a very profitable six year contract with the Buffalo Bills, in fact, was considered to be the most profitable contract for any defensive player in the history of the NFL. Mario Williams was born in Richlands, North Carolina in 1985. He attended North Carolina State College where as a member of the N.C. Wolfpack football team; he was placed at the top of the list for the 2006 NFL Draft. He is currently a defensive end for the Buffalo Bills and wears the number 94. 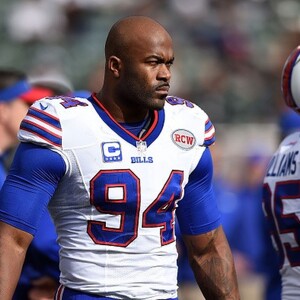