Marcus Allen Net Worth: Marcus Allen is an American former football running back and football analyst who has a net worth of $4 million. Marcus Allen was born March 26, 1960 in San Diego, California. As a professional football player, Allen ran for 12,243 yards and caught 587 passes for 5,412 yards during his career for both the Los Angeles Raiders and the Kansas City Chiefs from 1982 to 1997.

He scored 145 touchdowns, set a league record with 123 rushing touchdowns and was elected to six Pro Bowls over the course of his career. For a running back, he was also a fairly good passer, completing 12 of 27 passes for 285 yards and six touchdowns, with only one interception. Allen was the first player ever to gain more than 10,000 rushing yards and 5,000 receiving yards during his career. Allen is considered one of the greatest goal line and short-yard runners in National Football League (NFL) history. He was inducted into the College Football Hall of Fame in 2000 and the Pro Football Hall of Fame in 2003. His younger brother, Damon Allen, played quarterback for 23 seasons in the Canadian Football League and was professional football's all-time leader in passing yards. Marcus Allen is a member of the Laureus World Sports Academy and he is a Board Member for the Lott IMPACT Trophy, awarded annually to college football's Defensive IMPACT Player of the Year. His NFL stats include: consecutive seasons with multiple touchdowns: 16 – (tied with Irving Fryar); consecutive seasons with a rushing touchdown: 16; consecutive seasons with multiple rushing touchdowns: 16; oldest player to score 10+ touchdowns in a season: 37 years old. 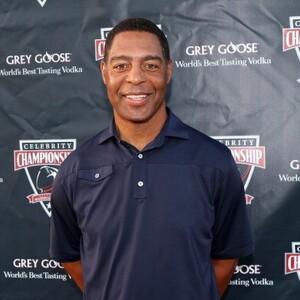