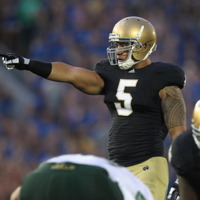 What is Manti Te'o's Net Worth?

Manti Te'o is an American professional football player who has a net worth of $3.5 million. Manti played for teams like the San Diego Chargers, the New Orleans Saints, and the Chicago Bears during his time in the NFL. Prior to this, Te'o played college football at Notre Dame. In 2021, his contract with the Bears expired, ostensibly ending his career as a linebacker. As we detail later in the article, Manti's infamous cat fishing situation arguably caused him to lose out on a predicted first-round draft pick. He ended up being drafted early in the second round. This drop did indeed cost him millions of dollars. More details about this later in the article. In total, Manti earned $10.4 million in total salary during his NFL career.

In August 2022 Netflix debuted a documentary about Manti in which he finally gave his side of his infamous cat fishing story. Manti was universally praised for his appearance and attitude about the situation and his forgiveness of the hoax's perpetrator.

Manti Malietau Louis Te'o was born on January 26th of 1991 in Laie, Hawaii. During his early years, he played high school football at a private school in Hawaii and earned numerous honors. This included State Defensive Player of the Year and Gatorade State Player of the year in 2007. During this year (his junior year), Manti recorded 90 tackles, five sacks, 400 rushing yards, and ten touchdowns as a running back. This immediately attracted the attention of colleges and recruiters around the nation.

Te'o had already received various offers from colleges before his senior year even began. That year, he lifted his high school to its first-ever state championship and recorded 129 tackles, 11 sacks, and four touchdowns. An especially notable play came when he returned a blocked punt for a touchdown. For these feats, Manti won Gatorade State Player of the Year for the second time and other honors.

In 2009, he joined the University of Notre Dame after graduating from high school. He then played in all 12 games of his freshman season and recorded 63 tackles. This was a very strong start, and it earned him Freshman All-American honors. During his sophomore season, he switched from outside linebacker to inside linebacker. That season, he recorded 133 tackles. It was also a record-high for his career that he would never beat. Next season, he followed up with 128 tackles and earned more honors. In his senior season, he recorded 103 total tackles as Notre Dame became the second-highest ranked college in the nation in terms of scoring defense.

Te'o left Notre Dame as one of the most decorated defensive players college football had ever seen. He won a number of awards, including the Maxwell Award, the Chuck Bednarik Award, the Butkus Award, the Lombardi Award, and the Walter Camp Award. He also recorded 437 total tackles for Notre Dame. 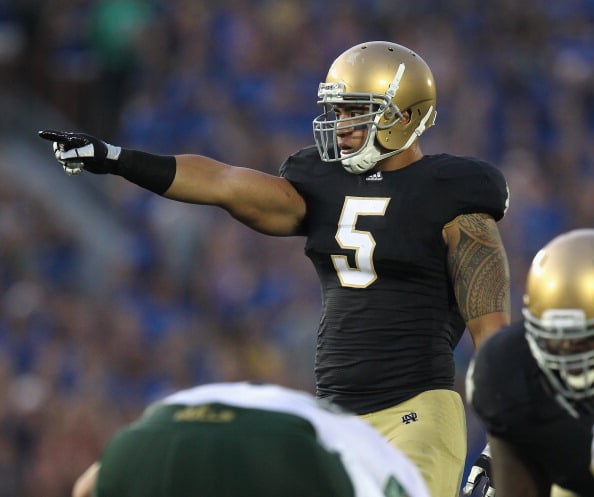 By the time it was time to declare his eligibility for the NFL Draft, Te'o had become somewhat disappointing for many recruiters – especially in regards to his 40-yard-dash time. He was eventually selected 38th overall by the San Diego Chargers and signed a four-year, $5-million contract. The deal included just over $3 million in guaranteed money – plus a signing bonus of about $2 million. Unfortunately, Manti injured his foot during the preseason opener, causing him to miss many of the next games. He eventually made his debut against the Houston Texans and finished his season with 61 tackles.

In 2014, he suffered a fractured foot – further hampering his career. He eventually recovered by the middle of the season and started to record his first interceptions and sacks. Over the next few years, he continued to record about 60 tackles per season, and in 2016 he was named one of the Chargers' team captains. Unfortunately, he suffered another injury that season – this time it was a torn Achilles tendon.

After being placed on the injured reserve list, Manti was traded to the New Orleans Saints. He signed a two-year contract with his new team and eventually led the franchise in tackles for loss during 2017. Unfortunately, he was not re-signed when his contract expired. However, New Orleans then re-signed him on a brief contract in 2019 after he did not play for much of the season.

Over the course of his NFL career, which lasted from 2013 to 2020, Manti Te'o earned $10.4 million in total salary (before taxes and other fees). His highest-paid season was 2018 when he earned $1.7 million from the New Orleans Saints.

As a Heisman finalist coming off a Championship appearance, Manti had been predicted to be drafted in the top half of the first round of the 2013 NFL draft. Some argue that his personal controversy caused him to drop into the second round. Manti was the 38th overall pick, the sixth pick in the second round. Upon being drafted by the Chargers, Manti signed a 4-year $5.172 million contract that included a $2.14 million signing bonus. If his controversies did cause him to drop out of the first round, Manti did indeed lose out on millions of dollars. As a comparison, Kenny Vaccaro was the 15th pick of the first round. Kenny's rookie contract with the Saints was a 4-year, $9.4 million deal that came with a $5.2 million signing bonus.


Manti Te'o is most-famous for his involvement in a cat fishing incident. Over several years while he was a student at Notre Dame, Manti was the victim of an elaborate hoax perpetrated by a man named Ronaiah Tuiasosopo. Tuiasosopo built a detailed fake world on Facebook and tricked Manti into thinking he was an attractive woman named Lennay Kekua. At one point during their online relationship, Manti was told that his girlfriend was in a coma after being in a car accident. Not long after coming out of the coma the hoaxer convinced Manti that Lennay had died from Leukemia.

Tragically, as this was all going on Manti's grandmother actually died.

When word got out that a star football player's grandmother and girlfriend died – purportedly on the same day – a media frenzy ensued.

Meanwhile, two deadspin reporters had received a tip that the girlfriend wasn't real and at the same time Manti also began to realize something wasn't right. The girlfriend called him and claimed to have come back from the dead after going into hiding.

Unfortunately when the cat fishing was exposed, Manti – the victim – was the subject of an overwhelming and unjust backlash. The backlash arguably caused Manti to be drafted in the second round of the NFL draft instead of the first, costing him million of dollars.

Nearly a decade after the incident, both Manti and the perpetrator appeared in a Netflix documentary about the hoax. The documentary conclusively showed that Manti did his absolute best at every step to handle a confusing incident. He was not involved. He reported the situation to his friends, parents and school administrators very soon after it became clear that it was a hoax.

Even after losing millions of dollars in the draft, being turned into a national punchline and likely having a less-than-stellar NFL career as a direct result of the embarrassment, Manti still forgave the hoaxer publicly in the Netflix documentary.

In 2020, Manti became engaged to his girlfriend, Jovi Nicole Engbino. They married later that year.