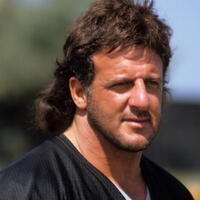 Lyle Alzado net worth: Lyle Alzado was an American professional football player who had a net worth of $2 million. Lyle Alzado was born in Brooklyn, New York in April 1949 and passed away in May 1992. Alzado was a Vardon Trophy Candidate at Lawrence High School. He played college football for Kilgore College and Yankton College. Alzado was drafted in the 4th round by the Denver Broncos in the 1971 NFL Draft. He played for Denver from 1971 to 1978 and then for the Cleveland Browns from 1979 to 1981. Alzado finished his career with the Los Angeles Raiders from 1982 to 1985. During his career Alzado won Super Bowl XVIII with the Raiders. He was a two time Pro Bowl selection and three time All-Pro selection. He was named All-AFC four times and Second-team All-AFC once. Alzado was named UPI AFC Player of the Year in 1977 and PFW NFL Comeback Player of the Year in 1982. As a defense end Alzado was known for his intense and intimidating playing style. Lyle Alzado was also an actor who appeared in the movies Ernest Goes to Camp, Tapeheads, Destroyer, Who's Harry Crumb, Shocktroop, Club Fed, Hangfire, Comrades in Arms, and Neon City. Alzado was also an amateur boxer who fought an exhibition match against Muhammad Ali in 1979. He was one of the first major athletes in the United States to admit to using anabolic steroids. Lyle Alzado passed away on May 14, 1992 at age 43 from brain cancer.