Luke Willson net worth: Luke Willson is an American football player who has a net worth of $14 million. He currently plays tight end for the Seattle Seahawks. Luke Willson was born on January 15, 1990 in LaSalle, Ontario. He played with the Canadian Junior National baseball team in 2008. In 2011 he signed with the Toronto Blue Jays, but went back to playing football at Rice.

His freshman year he finished with 7 catches for 122 yards and a touchdown. His sophomore season was more successful, with 33 catches, 425 yards and three touchdowns. In 2011, he was selected to the consensus first-team preseason All C-USA. He finished with 29 catches, 313 yards and three touchdowns. In his senior season, Willson ended with nine catches for 126 yards and two touchdowns. He was taken with the 158th pick (fifth round) by the Seattle Seahawks in the 2013 NFL Draft. He played in every game for the Seahawks his rookie year and made strides as a blocker, helping contribute to Seattle's successful running game. He finished the year with 20 catches for 272 yards and one touchdown. The lone score came in a game against the 49ers, where Wilson twice burned All-Pro linebacker Patrick Willis. 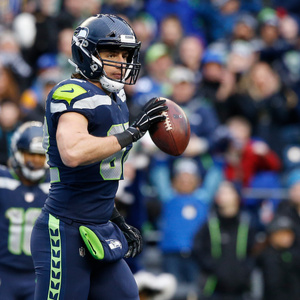