London Fletcher Net Worth: London Fletcher is a retired American professional football player who has a net worth of $12 million. Born in Cleveland, Ohio, in 1975, London Fletcher played college football at John Carroll University in his home state. The five-foot-ten, 242-pound linebacker went undrafted out of college, but the St.

Louis Rams picked him up as an undrafted free agent in 1998, and he made his debut for the team the same year. Fletcher went on to have one of the best careers of any UDFA, becoming one of just four players in the history of the league to play in more than 250 straight games. Fletcher played for the Rams until 2001 before joining the Buffalo Bills from 2002 until 2006 and later the Washington Redskins from 2007 until 2013. Fletcher is a four-time Pro Bowler in 2009, 2010, 2011, and 2012; he was honored twice as an All-Pro in 2011 and 2012. Fletcher was part of the Super Bowl XXXIV-winning team and won two NFC Championships in 1999 and 2001. At the time of his retirement, Fletcher held the record for most consecutive starts at linebacker. He won the Bart Starr Man of the Year Award in 2012 and joined the 20/20 club. In 2011, he was the Redskins' Defensive Player of the Year. Fletcher finished his career with 2,046 tackles, 39 sacks, 92 pass deflections, 23 interceptions, 20 forced fumbles, and two touchdowns. Fletcher has two children with his wife, Charne. 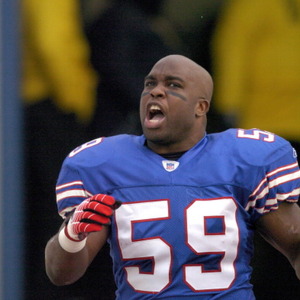